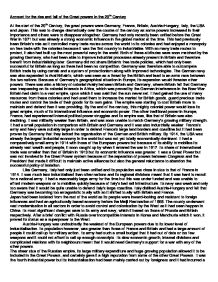 Account for the rise and fall of the Great powers in the 20th Century At the start of the 20th Century, the great powers were Germany, France, Britain, Austria-Hungary, Italy, the USA and Japan. This was to change dramatically over the course of the century as some powers increased in their importance and others were to disappear altogether. Germany had only recently been unified before the Great War in 1871 but was already a strong economic influence in the global market at the time. This had previously been Britain's role as it controlled many trade routes across the world to its colonies and had enjoyed a monopoly on free trade with the colonies because it was the first country to industrialise. With so many trade routes to protect, it also had built up the most powerful navy in the world. Both of these attributes were soon matched by the growing Germany, who had been able to improve industrial processes already present in Britain and therefore benefit from industrialising later. Germany did not share Britain's free trade policies, which had only been successful for Britain as long as there had been no competition. Germany was therefore able to outcompete British trade by using cartels and a system of protectionism along with improved technologies. The German navy was also expanded to rival Britain's, which was seen as a threat by the British and lead to an arms race between the two nations. Because of Germany's geographical situation in Europe, its expansion would threaten other powers. ...read more.

The Hapsburg empire had crumbled away, and in its place were several successor states that were politically and ethnically much more unstable, it would only be a matter of time before there were disputes within the new nation states. Germany had lost its colonial empire to Britain and its self-governing dominions and France. Even though it had experienced major territorial losses, military restrictions and an unstable economy, it still had the potential to become a major power again. Its economy was very unstable due to reparations, hyper inflation and the effects of the Wall Street Crash. Under the Nazis, the economy remained unstable because of the added pressure of increased military expenditure as Germany began to spend more on weapons than France, Britain and the US combined. It gradually became stronger and stronger, which daunted the unprepared allies to giving in to its territorial conquests of Austria and Czechoslovakia. Italy was dissatisfied with the land it had gained from the Peace Treaties and was largely ignored during the creation of the Treaty of Versailles. It began to modernise under Mussolini and was trying to bring itself more into the world stage. There was a build up of the navy and air force but this was not matched in the army. Its economy was still backward because of its continued reliance of small scale agriculture. It re-armed so rapidly that its weaponry became quickly outdated and behind that of the other powers by World War Two. Its monetary reserves were so low that it was unable to afford new weapons and Mussolini entered a war that his country was militarily and economically unable to fight. ...read more.

Japan's economy had grown with the help of US aid directly after the war and from the US need for supplies and arms during the Korean and Vietnam conflicts. The economy was also aided by the traditional high standards of Japanese manufacturing and the cheap, highly skilled labour force which helped lower the prices of Japanese goods compared with European goods. It also had greater access to the Asian markets than Europe, making its products more successful there. Japan's global influence declined after the War as it again turned into itself and concentrated on its economic success. The European traditional Great Powers were becoming less and less important in terms of global influence after the loss of their empires and it became clear how their power had declined after the World Wars. Russia was still considered a super power, but its economy was ailing under communism and even after it was restored to capitalism, its economy suffered many pitfalls and is still considered backward compared to European economies. When the colonies were given their independence, it created political and ethnic instability within many new nations, which became poor through many years of civil war or mismanagement by their new leaders, this became the Third world, to which the new Great Power, China belonged. The world was once again divided into two heavily armed camps after the Second World War, and countries were either with America against Russia or with Russia against America. This new war, the Cold War, was to last until the total collapse of the USSR and was to draw a boundary through Eastern Europe. ...read more.