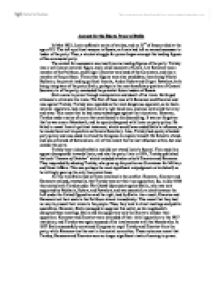 Account for the Rise to Power of Stalin In May 1922, Lenin suffered a series of strokes, and on 21st of January died at the age of 53. This left a political vacuum in Russia, as Lenin had left no named successor to leader of the party. Thus, a virulent struggle for power began amongst the leading figures of the communist party. The contest for succession was lead by some leading figures of the party. Trotsky was a well-known national figure, and a close associate of Lenin. Lev Kamenev was a member of the Politburo, and Grigori Zinoviev was head of the Comintern, and also a member of the politburo. Three other figures were also candidates, them being Nikolai Bukharin, the party's leading political theorist, Andrei Rykov and Grigori Pyatakov, both being rising stars of the party. Stalin, perhaps in the most beneficiary position of General Secretary to of the party, concluded the potential future leaders of Russia. Stalin came to power through manipulation and deceit of his rivals. ...read more.

Late in 1924, Trotsky published his book "Lessons of October" which included attacks on both Zinoviev and Kamenev. They responded by abusing Trotsky, who gave up his position as Commissar for Military and Naval Affairs. This was perhaps the most significant misjudgment on his behalf, as he willingly gave up his only true power base. All this time Stalin had not been involved in the conflict. However, Zinoviev and Kamenev realised, eventually, that Trotsky was not their true opposition. So, in July 1926 they united with Trotsky under The United Opposition against Stalin, who was now supported by Bukharin, Rykov, and Pyatakov, and was essentially a clash between the Left under the United Opposition and the right, lead by Stalin. As a result, Zinoviev and Kamenev lost their seats in the Politburo almost immediately. This meant that they had no way to present their views to the people. Thus, they took to street meetings and public assemblies. However, Stalin managed to suppress this outlet, as his roughneck's disrupted these meetings. ...read more.

His opponents' view of him as the underdog allowed Stalin to manipulate their dislike of Trotsky, and also turned them against each other by exploiting their weaknesses. Stalin also took advantage of the fact that he directed Party policy. This meant that anyone who opposed his line of proceedings could be accused of factionalism. Stalin also won over the people, who admired his humble origins and supported his views of continued prosperity under the continued NEP, and also the press, by securing the media and press. This meant that his opponents had no way of putting their views to the people. Also, the new members of the party were easily influenced by the pro-Stalin propaganda, which meant that he secured an ever-growing power base. To conclude, by 1928 Stalin manipulated his way into the leading position in Russia. His astuteness as a politician and his cunning ways allowed him to completely outwit even the more intellectual Trotsky, while at the same time win the approval of the people. By the time of his succession to Lenin, there was no much doubt that he was the next true leader of Communist Russia. ...read more.