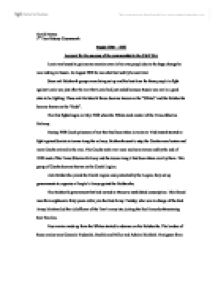 Account for the success of the communists in the Civil War

David Norton 5th Year History Coursework Russia 1905 - 1941 Account for the success of the communists in the Civil War Lenin was bound to gain some enemies even in his own people due to the huge change he was making in Russia. In August 1918 he was shot but luckily he survived. Soon anti-Bolshevik groups were being set up and the best time for these people to fight against Lenin was just after the war that Lenin had just ended because Russia was not in a good state to be fighting. These anti-Bolshevik forces became known as the "Whites" and the Bolsheviks became known as the "Reds". The first fights began in May 1918 when the Whites took control of the Trans-Siberian Railway. During 1918 Czech prisoners of war that had been taken in trains to Vladivostok started to fight against Soviets in towns along the railway. Bolsheviks sent to stop the Czechs were beaten and more Czechs arrived in the area. ...read more.

to begin a "Red Terror". Cheka agents tortured and killed anyone who went against the Reds and anyone who worked for the Whites. Trotsky also said that anyone who deserted his army would be shot. This was true; when a battalion of the Red Army tried to desert Trotsky had every one in ten of them shot by a firing squad. Trotsky was a very effective military leader. From his war train Trotsky travelled around Russia ordering the Red Army and dealing with troublemakers. The Reds slowly began to win the civil war. In 1919 the foreign armies withdrew from Russia and the Red Army defeated each White army one by one until they had defeated them all and won the Civil War. The last major offensive against the Bolsheviks was in March 1921 when the sailors from the naval base on the island of Kronstadt rebelled. These sailors were formerly the most loyal of all people to the Bolsheviks but now they had turned against the Bolsheviks. ...read more.

The Whites, however, were very unorganised. They consisted of many different groups of people who did not work together. Communication between the White armies was poor. The armies were spread all over Russia so they could not fight together at the same time and focus their forces. The people did not like the Bolsheviks but preferred them to the Whites because if the Whites won the Tsar and the landlords would return. The most important factors that made the Reds win the war, and also made the Whites lose the war, were that the Red Army was very well organised and led by Trotsky and the Whites were spread over Russia and not united so Trotsky could move his army to where force was required and defeat each White army one by one. The support of the peasants to the Bolsheviks was also a very big factor. The peasants supported the Reds because they wanted a change and they knew that things would be better after the war if the Reds won rather than returning back to dictatorship from the Tsar and landlords if the Whites won. ...read more.