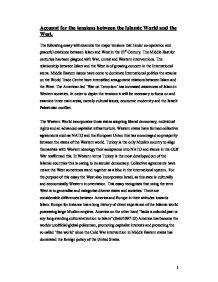 Account for the tensions between the Islamic World and the West

Account for the tensions between the Islamic World and the West. The following essay will examine the major tensions that hinder co-operation and peaceful existence between Islam and West in the 21st Century. The Middle East for centuries has been plagued with War, unrest and Western interventions. The relationship between Islam and the West is of growing concern in the International arena. Middle Eastern issues have come to dominate International politics the attacks on the World Trade Centre have intensified antagonistic relations between Islam and the West. The American led 'War on Terrorism' has increased awareness of Islam in Western societies. In order to depict the tensions it will be necessary to focus on and examine three main areas, namely cultural issues, economic modernity and the Israeli Palestinian conflict. The Western World incorporates those states adopting liberal democracy, individual rights and an advanced capitalist infrastructure. Western states have formed collective agreements such as NATO and the European Union this has encouraged co prosperity between the states of the Western world. Turkey is the only Muslim country to align themselves with Western ideology their acceptance into NATO and stance in the Gulf War reaffirmed this. In Western terms Turkey is the most developed out of the Islamic countries this is owing to its secular democracy. Collective agreements have meant the West sometimes stand together as a bloc in the international system. For the purpose of this essay the West also incorporates Israel, as this state is culturally and economically Western in orientation. This essay recognises that using the term West is to generalise and categorise diverse states and societies. There are considerable differences between America and Europe in their attitudes towards Islam. Europe for instance has a long history of direct experience of the Islamic world possessing large Muslim empires. America on the other hand "lacks a colonial past or any long standing cultural attention to Islam" (Said/1997:13) ...read more.

This essay has so far examined cultural issues surrounding the West and Islam. The frequent underlying tenor in these tensions is Islam's religious values and traditions. These tensions have arisen from the concept of Western modernity, one way of characterising and understanding modernity is in terms of the Western Enlightenment. Central to Enlightenment thought was the acceptance of scientific rationality by accepting the values of scientific reason and logic meant all myths and holy ideals had to be abolished. Descartes argued, "reason is universal, objective and autonomous when used according to a method enables science and society to progress" (Robinson/1999:13) The British Industrial Revolution was a product of the Enlightenment and marks the Western acceptance of scientific laws and values. Western societies grew owing to this emphasis on rationalism, individualism and democracy. Western societies changed to favour consumerism and materialism, the role of the Church and religious values has diminished in the Western world. Islam on the other hand did not witness an Enlightenment of scientific ideas thus Islam favoured orthodoxy over reason. Western modernity is an evolving process; contemporary modernity has resulted in the phenomenon of Globalisation. There is no one defining definition of Globalisation although one defining characteristic is "it appears to justify the spread of Western culture and capitalist society" (Waters/1995: 3) it does this by promoting economic co- prosperity, the driving force of globalisation is the spread of business, modernisation, culture and the flow of Western ideas. Coca Cola, IBM Shell Oil and McDonalds are all visible cultural expressions of Globalisation. The defeat of communism and the change in world order gave rise to Western capitalism. As Francis Fukuyama captured in his book 'The End of History And The Last Man.' Here Fukuyama argued "we are at the end of history because there is only one system that will continue to dominate world politics, that of the liberal democratic West"(Fukuyama/1993:28) ...read more.

Since 1949 "altogether Israel has received more than $90 billion in assistance"(Bard/2002) America has turned a blind eye to the frivolities of the Israeli state. The activity of the state of Israel is a major cause of instability in the Middle East. Israel has ethnically cleansed the Palestinians placing them in extreme poverty and committing deplorable human rights offences. Such as the refusal of Palestinians the right to return home and the Chabera and Sahtila massacres. American foreign policy since the 11th of September have made it clear to the World, what actions can be defined and considered as terrorism and what actions can not. America considers the acts of Palestinians against Israeli civilians and soldiers to be acts of terrorism. However the U.S appears to believe that no acts against Palestinians by Israelis constitute terrorism. This is a prime example of double standards and adds to the tensions in the already unhinged politics of East and West. The US repeated veto of UN resolutions concerning Israel remains a thorn in the side of relations between the Islamic world and West. Israel's actions make Western rhetoric on issues such as international aggression; human rights and weapons of mass destruction sound hollow and hypocritical to Islamic ears. This essay has accounted for the major tensions between the Islamic world and the West the underlying and recurring characteristic is Orientalism. This has framed the West's understanding, perception and intervention in the Islamic world. Cultural issues, economic modernity and the Palestinian question are inseparable when evaluating tensions between the West and Islam. However I feel that Orientalism is an overwhelming if not the predominate factor that underlies a number of the other issues and recurs across conflicts. The situation however is complex and there is some plausibility to all the explanations offered above, with the exception of the explanation, which blames Islamic culture for conflict, an explanation that is over simplistic and undermined by Said's critique. To conclude, there are a number of causes of tension between Islam and West, of which Western Orientalist discourse is the most significant. ...read more.