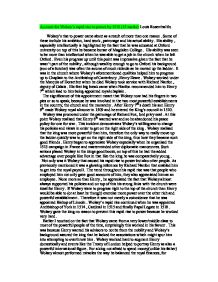 Account for Wolsey's rapid rise to power by 1518 (15 marks) Louis Rosenthal 6u Wolsey's rise to power came about as a result of more than one reason . Some of these include his ambition, hard work , patronage and his actual ability . His ability , especially intellectually is highlighted by the fact that he was educated at Oxford university on top of this he became bursar of Magdalen College . His ability was seen to be more than intellectual when he was able to get a job in the church when he left Oxford . Even his progress up until this point was impressive given the fact that he wasn't part of the nobility , although wealthy enough to go to Oxford his background (son of a butcher) was often the source of much ridicule as he moved up the ladder . It was in the church where Wolsey's aforementioned qualities helped him to progress up to Chaplain to the Archbishop of Canterbury ,Henry Deare . ...read more.

The trend throughout his rapid rise was that people who employed him not only gave good accounts of him, they also appreciated him as an employee . None more so than Henry , he appreciated the fact that Wolsey almost always supported his policies and on top of this his strong links with the church were ideal for Henry . If Wolsey were to progress right to the top of the church then Henry would be able to (or at least he though) exercise more power over the other rich and powerful establishment . Therefore it was not merely a coincidence that he was appointed Bishop of Lincoln . Wolsey's rapid rise continued when he was appointed Archbishop of York in 1514 , Cardinal in 1515 and finally Papal Legate in 1518 . Wolsey gave the king no reason to prevent this rapid rise to power because he worked very hard . Earlier I touched on the fact that Wolsey came from a very lower/middle class to most of the powerful people of the time, surprisingly this worked in his favour . ...read more.

Wolsey also dealt effectively with opposition to is rise to power . The fact that he acted as a backer to the king on many policies and also his closeness to the king arose much resentment from the nobility . In effect it seemed to the nobility that Wolsey had a monopoly on the kings favour . An example of him dealing effectively with opposition was when he had Burgavenny and Northumberland convicted in the Star chamber . Wolsey tried to remove not only opposition to the king but also himself and he installed his own men in influential positions e.g. Groom of the Stool . Overall undoubtedly Wolsey possessed many qualities like hard work, intelligence, loyalty and ability to manipulate people that contributed to is rise to power . However it was also significant the way he was able to gain support of powerful figures, none more so than the King and the pope . Some argue that Wolsey was very lucky and that it could have been someone else instead of him . But I would argue that he had good characteristics and also his background meant that his route to the top seemed free of major obstructions which obviously helped . ...read more.