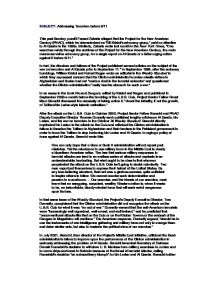 SUBJECT: Addressing Terrorism before 9/11 This past Sunday, pundit Fareed Zakaria alleged that the Project for the New American Century (PNAC), which he characterized as "Bill Kristol's advocacy group," paid no attention to Al Qaeda in the 1990s. Similarly, Zakaria wrote last month in the New York Times, "One searches vainly through the archives of the Project for the New American Century, the main neoconservative advocacy group, for a single report on Al Qaeda or a letter urging action against it before 9/11." In fact, the directors and fellows of the Project published several articles on the subject of the war on terrorism and Al Qaeda prior to September 11.* In September 1998, after the embassy bombings, William Kristol and Robert Kagan wrote an editorial in the Weekly Standard in which they expressed concern that the Clinton administration's cruise missile strikes in Afghanistan and Sudan had not "made a dent in the terrorist networks" and questioned whether the Clinton administration "really has the stomach for such a war." ...read more.

Yet the reluctance to use military force in the Middle East is clearly a bipartisan American reflex. The fear that serious military responses to terrorist attacks can lead to an endless series of attacks and reprisals is an understandable foreboding. But what ought to be clear is that whoever perpetrated the attack on the U.S.S. Cole isn't going to desist voluntarily. Two men vaporized themselves to express their hatred of the United States. By any true-believing standard, their act was a glorious success, quite sufficient to inspire others to follow. We cannot counter such determination and passion in a courtroom.... Our enemies, and the friends of our enemies, must know that an easygoing, corpulent, wealthy Western nation is, when it wants to be, an indomitable, bloody-minded force that will seek awful vengeance upon its foes. In that same issue of the Weekly Standard, the Project's Deputy Executive Director, Tom Donnelly, complained that the Clinton administration did not recognize the attack on the U.S.S. ...read more.

Gerecht urged the adoption of a far more aggressive counter-terrorism policy-one much like that eventually adopted by the Bush administration after 9/11. Despite this commentary by Project directors and fellows, including especially Reuel Gerecht's all-too-prescient forecast, we would be the first to admit that we, like so many others, paid too little attention to the threat from Al Qaeda prior to September 11. We do find it odd, however, to be criticized by someone who seems to have paid even less attention to that threat than we did. A quick search of Zakaria's writings prior to September 11, 2001 produces only one article on the threat of global terrorism, with no mention of Al Qaeda or Osama bin Laden. ------------------------- * In addition to sending out faxes, Project directors and fellows publish articles on many subjects, and these publications often receive more attention than the faxes. Some of the articles discussed above were also faxed out, along with other memoranda such as an October 17, 2000 commentary on VOA coverage of the attack on the U.S.S. Cole. By any standard, Zakaria's search was incomplete. ...read more.