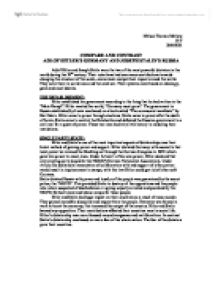 Adlof Hitler and Joseph Stalin were the two of the most powerful dictators in the world during the 20th century.

Mithun Thomas Mathew 10 T 28/8/2001 COMPARE AND CONTRAST ADLOF HITLER'S GERMANY AND JOSEPH STALIN'S RUSSIA Adlof Hitler and Joseph Stalin were the two of the most powerful dictators in the world during the 20th century. Their rules have had enormous contributions towards changing the structure of the social, economical and political impact around the world. They were there in world wars and the cold war. Their systems were based on ideology, goals and cruel desires. THE ESTABLISHMENT: Hitler established his government according to the thing that he had written in the "Mein Kampf". Hitler wanted the world; "Germany must grow". The government in Russia established by Lenin was based on a book called "The communist manifesto" by Karl Marx. Hitler came to power through elections. Stalin came to power after the death of Lenin; Stalin came to control the Bolsheviks and defeated the Russian government in a civil war for a quest of power. These two men had very little history in modeling their revolutions. SINGLE PARTY STATE: Hitler and Stalin's one of the most important aspects of dictatorships was their brutal method of gaining power and support. Hitler dictated Germany with ascend to that level power he rammed the Enabling act through the German Congress in 1933 which gave him power to enact, laws. ...read more.

The rich peasants also hired works to do work. So Stalin sent rich peasants to camps. Millions of Russians were killed by Stalin's attempt to stop this event. Stalin also introduced a series of five-year plans in Russia. These were meant to enhance the agriculture, industry and infrastructure, now the Soviet economy was having targets to meet. Stalin increased the industries and their output. As a result of Stalin's control, the Soviet economy was the fastest to grow rapidly in history. The result of the helped Stalin to reduce unemployment. Hitler and Stalin's control over the economy had strengthened their fascist communist control widely. They both Hitler and Stalin got what they wanted: a stable economy. Stalin's plans were less violent and more sensible. Industrialization in Russia led by Stalin help Russia to be another superpower. Millions were killed during the regimes of Hitler and Stalin attempts to control their economies. During Hitler dictatorship only success was the four-year plan, which raised momentum in rearmament his system of conscription, works for unemployed, this increased the German army and this reduced unemployment. The invasions over the Ruhr and Sudetenland, which gave increase in the army and a boost to the economy. The failures of Hitler are the German economy was not ready for the World War 2. ...read more.

The cultures of the both Hitler and Stalin went for some years. They both had a major role in forming the culture. IDEOLOGIES: Ideologies of Hitler were quite simple and will applying when put in practice. He wanted to unite all German speakers and give them living and breathing space to recover. His ideology led to massive contributions to the world, with deaths of millions, the holocaust and World War 2. To Germany Hitler became a respected dictator within totalitarian state and indoctrinated everyone to support Nazism Stalin's ideology was complete different and very simple. He wanted Russia to industrialize and expand as a communist state with equality and without problems. He wanted Russia to be a super power, he dictated Russia with complete control. Hitler and Stalin were the most ruthless and famous dictators of the 20th century. The rise of Stalin promoted communism, which was forever going to change the world, and rise of Nazism caused millions to die during the World Wars. Stalin rebuilds the Russian economy and tried to make it a superpower. German economy gave Hitler a chance to avenge The Versailles Treaty. The government in two different system of thought was very similar. Hitler was a threat to everyone and needed to be defeated. Russia kept to them and bothered no one. In the World War 2 Germany was defeated in the battle and soon after Russia's Iron Curtain was being pulled down. ...read more.