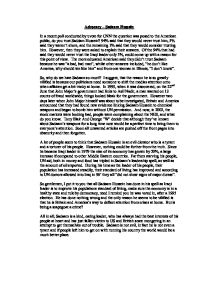 Advocacy - Sadaam Hussain In a recent poll conducted by uvote for CNN the question was posed to the American public, do you trust Saddam Hussein? 94% said that they would never trust him, 5% said they weren't shore, and the remaining 1% said that they would consider trusting him. However, then they were asked to explain their answers. Of the 94% that had said they would never trust the Iraqi leader only 5%, could come up with a reason for this point of view. The more educated American said they didn't trust Sadaam because he was "a bad, bad man", whilst other answers included, "he don't like America, why should we like him" and from one woman in Illinois, "I don't know". ...read more.

And now, in 2002, the stock markets were looking bad, people were complaining about the NHS, and what do you know. Tony Blair And George "W" decide that although they've known about Sadaam's weapons for a long time now would be a perfect time to bring them to everyone's attention. Soon all unwanted articles are pushed off the front pages into obscurity and then forgotten. A lot of people seem to think that Sadaam Hussain is an evil dictator who is a tyrant and a torturer of his people. However, nothing could be further from the truth. Since he became Iraqi leader in 1979 the size of its economy has grown by 20%, a large increase if compared to other Middle Eastern countries. ...read more.

of living, make sure the economy is in a healthy state and rule by democracy, need I remind you he was voted in, after a 1995 election. He has done nothing wrong and the only reason he seems to be vilified is that he is Britain and America's way to deflect attention from crises at home. But is being a scapegoat a crime? All in all, Sadaam is a kind, caring leader, who has always had the best interests of his people at heart and has just fallen victim to US and British scare mongering in an attempt to get themselves out of trouble. Sadaam is not evil, in fact he is not even a tyrant and if people left him to get on with running his country the world would be a much better place. ...read more.