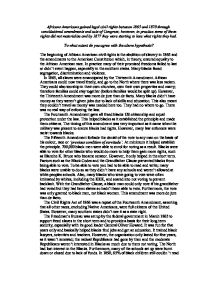 Africans Americans gained legal civil rights between 1865 and 1870 through constitutional amendments and acts of Congress; however, in practice some of these rights did not materialise and by 1877 they were starting to lose what rights they had.To what ex

Africans Americans gained legal civil rights between 1865 and 1870 through constitutional amendments and acts of Congress; however, in practice some of these rights did not materialise and by 1877 they were starting to lose what rights they had. To what extent do you agree with the above hypothesis? The beginning of African American civil rights is the abolition of slavery in 1865 and the amendments to the American Constitution which, in theory, ensured equality to the African American race. In practice many of their promised freedoms failed to last or didn't event happen, especially in the southern states. Many blacks faced segregation, discrimination and violence. In 1865, all slaves were emancipated by the Thirteenth Amendment. African Americans could now travel freely, and go to the North where there was less racism. They could also worship in their own churches, own their own properties and marry; therefore families could stay together (before families would be split up). ...read more.

Factors such as the Black Codes and the Grandfather Clause prevented blacks from being able to vote. To be able to vote you had to be able to read and write; many blacks were unable to do so as they didn't have any schools and weren't allowed at white peoples schools. Also, many blacks who were going to vote were often intimated by whites, including the KKK, and scared into not voting to prevent backlash. With the Grandfather Clause, a black man could only vote if his grandfather had voted but they had been slaves so hadn't been able to vote. Furthermore, the vote was only granted to black men, not black women. This amendment was more de jure than de facto. The Civil Rights Act of 1866 was a repeat of the Fourteenth Amendment, asserting that all other races, excluding Native Americans, were full citizens of the United States. However, many southern states didn't see it as a state right. ...read more.

This hindered the granting of civil rights to African Americans as it gave more power to the states. In US v Cruikshank (1876) the Supreme Court ruled that federal officers could only take action against states not individuals, when the officers arrested over a hundred white men after a riot in Louisiana which left seventy African Americans dead. This again showed the states had more power than the federal government. Therefore, they could ultimately take away the rights of blacks, especially in the South. Most black rights looked secure in theory (de jure), however many blacks didn't actually acquire those rights (de facto). The reality was different to the principle. Most civil rights for blacks remained theoretical. Many blacks were too intimated to exercise their rights. The hypothesis of black rights being materialised and deteriorating seems to be mostly true, due to the most rights being just de jure than de facto. Organisations such as the KKK seemed to make sure of this and the Republicans and the North were both beginning to lose interest in Blacks. ?? ?? ?? ?? ...read more.