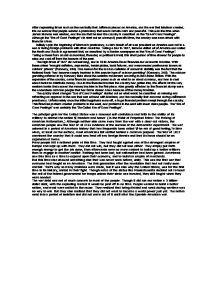 After depressing times such as the neutrality that Jefferson placed on America, and the war that Madison created, it is no wonder that people wanted a presidency that would remain calm and peaceful.

After depressing times such as the neutrality that Jefferson placed on America, and the war that Madison created, it is no wonder that people wanted a presidency that would remain calm and peaceful. This was the time when James Monroe was elected, and the era that he lead the country is described as the "Era of Good Feelings". Although the "Era of Good Feelings" did start out as a tranquil, peaceful time, the country was soon struck with financial crises. Initially upon the beginning of Monroe's presidency, a calm breath of air was prevalent as America was not in a war or facing foreign problems with other countries. Taking a tour in 1817, Monroe visited all of America and united the North and South in agreement that, as described by a Boston newspaper as the "Era of Good Feelings". Taking a break from crucial economical, financial, or political turmoil, this short period of time allowed for people to relax and cool off from the hazards of the past. ...read more.

The quickly short changed "Era of Good Feelings" started out as what would be described as relaxing and refreshing as opposed to the war that was at hand with Madison, and the neutrality that occurred during Jefferson's presidency. Unfortunately once the initial happiness wore off, a huge financial problem swept through the country. This financial problem created problems in the west, and problems in the east with lower class people. The "Era of Good Feelings" was certainly the "So-Called Era of Good Feelings". The principal gain for the United States was a renewed self-confidence and faith in the ability of its military to defend the nation? freedom and honor. (In the Midst of Perpetual Fetes: The Making of American Nationalism,) Although neither side came away from the war with a clear-cut victory, the American people saw the War of 1812 as evidence of the success of the democratic experiment. ...read more.

This was the first war that everyone had fought as an American. The first generation after the revolution that had not really seen combat. That's why so many mistakes were made, but it was also why the United States, was for the first time in its history, united in their fight. Though some of the states like Massachusetts decided not to heed the call of the federal government for troops unless their state was invaded, they still fought when they were needed. The war debt was not of much concern to most of the people. Though it did run our nation a 3 billion-dollar debt, with the exploding market it would be paid off in no time. People wanted to build a better nation, and most were united in the cause. They realized that being divided and weak during wartime was no way to win. But they also realized that they did not want to become a world power just yet. The nation went into a period of isolation and did not come out of it until after the Spanish-American war. ...read more.