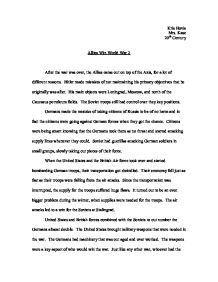 After the war was over, the Allies came out on top of the Axis, for a lot of different reasons

Kris Hovis Mrs. Kase 20th Century Allies Win World War 2 After the war was over, the Allies came out on top of the Axis, for a lot of different reasons. Hitler made mistakes of not maintaining his primary objectives that he originally was after. His main objects were Leningrad, Moscow, and north of the Caucasus petroleum fields. The Soviet troops still had control over they key positions. Germans made the mistake of taking citizens of Russia to be of no harm and in fact the citizens were going against German forces when they got the chance. Citizens were being smart knowing that the Germans took them as no threat and started attacking supply lines whenever they could. ...read more.

The Germans had machinery that was out aged and over worked. The weapons were a key aspect of who would win the war. Just like any other war, whoever had the best weapons would defeat the other side. When the machinery and weapons out numbered the Germans, it was easy to see who would win this war. The worst thing that could have happened for the Germans was the United States and British forces joining the Soviet forces to create one huge domination. The United States alone was a dominating threat, once it got involved in the war; it took charge and defeated Morocco and Algeria and pushed east. ...read more.

It was this attack, which made the United States make a huge decision. Drop the first atomic bomb on Japan. After the United States dropped two atomic bombs on Japan, the Japanese surrendered. The Allies beat the Axis because of one important thing that sticks out in my head, numbers. The Allies outnumbered the Axis in their troops. The United States and the British troops joining forces with the Allies also was a huge factor. Another thing was the weapons and the machinery that the Allies had compared to the Axis. By the Japanese attacking Pearl Harbor, it pushed the United States to be the leading factor through out the war. Hitler played a huge role in making poor decisions for the Germans and possibly lost the war for the Axis. ...read more.