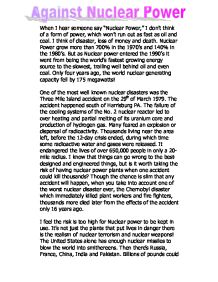 When I hear someone say "Nuclear Power," I don't think of a form of power, which won't run out as fast as oil and coal. I think of disaster, loss of money and death. Nuclear Power grew more than 700% in the 1970's and 140% in the 1980's. But as Nuclear power entered the 1990's it went from being the world's fastest growing energy source to the slowest, trailing well behind oil and even coal. Only four years ago, the world nuclear generating capacity fell by 175 megawatts! One of the most well known nuclear disasters was the Three Mile Island accident on the 29th of March 1979. The accident happened south of Harrisburg PA. ...read more.

It endangered the lives of over 650,000 people in only a 20-mile radius. I know that things can go wrong to the best-designed and engineered things, but is it worth taking the risk of having nuclear power plants when one accident could kill thousands? Though the chance is slim that any accident will happen, when you take into account one of the worst nuclear disaster ever, the Chernobyl disaster which immediately killed plant workers and fire fighters, thousands more died later from the effects of the accident only 16 years ago. I feel the risk is too high for Nuclear power to be kept in use. ...read more.

Is the tight security on the plants necessary? The answer to all of those is yes! There were diagrams of Nuclear Power facilities discovered in a raided house in Kabul, Afghanistan. Think of a World War 3 happening tomorrow, there wouldn't be time for us to realise what was going before the power of the nuclear weapons that countries across the world have, would destroy the world. I will conclude my talk by saying that I feel nuclear power and weapons are both time bombs waiting to explode. It is only a matter of time before another accident happens or war is pronounced, lets just hope that if we have to use nuclear power, we find some of way of making and using it without taking thousands of lives. ...read more.