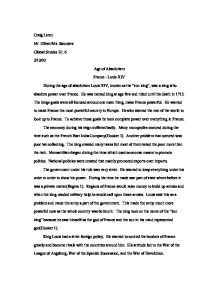 Craig Leren Mr. Oliver/Ms. Saunders Global Stuides Hr. 6 3/13/02 Age of Absolutism France - Louis XIV During the age of absolutism Louis XIV, known as the "sun king", was a king who absolute power over France. He was named king at age five and ruled until his death in 1715. The kings goals were all focused around one main thing, make France powerful. He wanted to make France the most poewrful country in Europe. He also wanted the rest of the world to look up to France. To achieve these goals he took complete power over everything in France. The economy during his reign suffered badly. ...read more.

Louis saw this as a problem and made the army a part of the government. This made the army much more powerful now as the whole country was behind it. The king took on the name of the "sun king" because he saw himself as the god of France and the sun in his mind represented god(Hooker 1). King Louis had a strict foreign policy. He wanted to control the borders of France greatly and become rivals with the countries around him. His attitude led to the War of the League of Augsburg, War of the Spanish Succession, and the War of Devolution. Louis destroyed regional independence by dividing France into thirtysix generalites. ...read more.

Many of the Protestents decided to leave France rather then convert to Cathlolicism. King Louis XIV had many effects on France. He gave France much more power by making it one of the countries main goals. He improved the military by making it a matter of the government rather then a private matter. He made King and State the same thing(Regina 2). He unified the French government to make it be as powerful as possible. He made France an official rival of Britain. Some bad things he did for France though were he taxed the poor instead of the rich, he put France into lots of debt, and the court of Versailles was removed from the lives of the people. Overall King Louis XIV had both postive and negative effects on France, but his reign can be summed up in one word, power. ...read more.