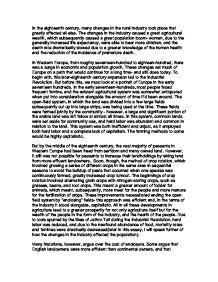 Agriculture-18th century. In Western Europe, from roughly seventeen-hundred to eighteen-hundred, there was a surge in economic and population growth.

In the eighteenth century, many changes in the rural industry took place that greatly affected all else. The changes in the industry caused a great agricultural wealth, which subsequently caused a great population boom- women, due to the generally increased life expectancy, were able to bear more children, and the death rate dramatically slowed due to a greater knowledge of the human health and the reduction of the incidence of premature death. In Western Europe, from roughly seventeen-hundred to eighteen-hundred, there was a surge in economic and population growth. These changes set much of Europe on a path that would continue for a long time- and still does today. To begin with, this later-eighteenth century expansion led to the Industrial Revolution. But before this, we must look at a portrait of Europe in the early seventeen hundreds. In the early seventeen-hundreds, most people faced frequent famine, and the existent agricultural system was somewhat antiquated when put into consideration alongside the amount of time it'd been around. The open-field system, in which the land was divided into a few large fields subsequently cut up into large strips, was being used at the time. These fields were farmed jointly by the community - however, a large and significant portion of the arable land was left fallow at almost all times. ...read more.

In reality, the enclosure and the exclusion of cottagers and laborers had begun as early as the sixteenth century. It was the independent peasant-farmers who could not compete and hence began to disappear. The tenant farmers, who rented land from affluent landlords, benefited from enclosure more than anyone else, and, as somewhat of a result, by 1815, a minority of English and Scottish landlords held most of the land(which they rented to tenants, who hired laborers. However, due to the developments of the Industrial revolution, labor was not as grueling as it was during the times of open field farming). Another great aspect of the changes that took place in the eighteenth century was the boom in population. The traditional checks on the growth of the population were famine, disease, and war, all of which kept Europe's growth rate fairly low. In the eighteenth century, it can easily be said that the boom in the population(like any other sudden and drastic growth in the population) was caused by the decline in death rate. This reduction in the death can be accounted for by many things. First, we can account for the elimination of the plague by strict quarantine measures- the elimination of the black rat by the brown rat was key in the disappearance and elimination of the disease. ...read more.

The textile industry in England is also an example of the putting out system- the industry was a family one, with women spinning and men weaving. These things took place in tiny cottages owned by said families. A major issue with the family business model, though, it can be noted, was that there weren't enough spinners to make yarn for the weaver, and due to the shortage of employees in each of these businesses, relations between workers and capitalist employers were rather strained. Lastly, we can also make note of agricultural trade as well as foreign trade in general enhancing the industry and economy- other nations had taken note of Western Europe's newly found affluence, and wanted to do with it. In conclusion, it can be noted that the new capitalist systems on the rise were due to the new discovery of the mass, efficient production of food. Food, as a basic need, was needed in great amounts, and once this was done and bloomed into an industry, all the other things that had previously been related to the agricultural industries as well as all the things that'd helped the agricultural industry along became[though related ones] industries of their own. These industries today mark our world in their evolved forms, and without the capitalist attitude that has been carried out to the modern era, our economy would most certainly not be the same. ...read more.