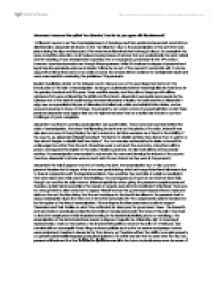 Alexander II deserved the epithet Tsar Liberator', how far do you agree with this statement?

Alexander II deserved the epithet 'Tsar Liberator', how far do you agree with this statement? 'To liberate' means to set free from imprisonment or bondage and from social and economic constraints or discrimination. Alexander II is known as the 'Tsar Liberator' due to the emancipation of the serfs that took place during his reign and because of the many more liberal reforms he brought about, for example in the army and within education. He introduced a programme of reforms that was undoubtedly the most radical and far reaching of any attempted by a previous Tsar or a European government in the 19th century. However, a profound paradox ran through this programme. While it introduced a degree of personal and legal freedom previously unknown in Russia, it did so by an act of the monarch's autocratic will. It can be argued that his motives were not so noble or moral. The reforms did not achieve the anticipated results and were unsuccessful in combating the problems of the peasants. Russia's humiliating defeat at the Crimean war in 1855 was one of the most important factors for the introduction of the Edict of Emancipation. ...read more.

The domestic serfs who had not previously worked the land did not receive land under the terms of the edict. They had to find other employment which included working in the slowly industrializing sector or metallurgy. The emancipation of the Serfs should have meant a degree of equality i.e. citizenship, right to have legal representation, trade on the market or be involved with politics. However the edict of 19 February 1861 certainly did not accomplish these things and most policies such as the tax system and passport reform were postponed. Freedom is always better than slavery, yet freedom without the ability to acquire property or upward social mobility imposes a new kind of slavery. It is a little wonder that for years after the 1861 act, peasants still believed that the real emancipation was still in the future. Ironically many were far worse off after the emancipation than they had been before. Clearly, his reforms did not create any 'liberating effect' on peasants. Emancipation not only failed the peasants, it angered the nobility from whom it had taken power and it led to bitter criticism of the Tsar concerning injustice in land allocation and compensation for land owners. ...read more.

The Catholic Church was replaced by the Russian Orthodox Church. Similar policies were introduced in Finland, Ukraine, Armenia and the Baltic states. Such policies do not indicate towards a just ruler or a 'liberator.' The growth of radical opposition, ranging from nihilism to populism suggests that the reforms had a counter-effect on people. The position of the Tsar was seriously threatened with the rise of terrorism. Such outcomes makes one question the efforts of the Tsar. Were the reforms just half - hearted concessions? The popular opinion during 1870-81 seems to suggest that people did not believe him to be a 'liberator'. In conclusion, after all these aforementioned reforms, the concept of the state embodied in the person of the autocrat was in no way altered. The political system that initiated these reforms, supposedly to strengthen its own position, had collapsed within 60 years of their introduction. It is, therefore difficult to view these reforms as successful. Even though Alexander II went further than any other Tsar and liberated 40 million from slavery, there were other ulterior motives. The reforms did not have the desired impacts and the Russian society became worse off than before. Furthermore, his assassination by terrorist group indicates the discontent among people. Hence, it would be ignorant to honor him with the title of 'Tsar Liberator'. ...read more.