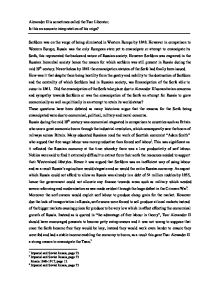 Alexander II is sometimes called the Tsar Liberator. Is this an accurate interpretation of his reign?

Alexander II is sometimes called the Tsar Liberator. Is this an accurate interpretation of his reign? Serfdom was on the verge of being eliminated in Western Europe by 1848. However in comparison to Western Europe, Russia was the only European state yet to emancipate or attempt to emancipate its Serfs, this represented the backward nature of Russian society. However Serfdom was engraved in the Russian hierarchal society hence the reason for which serfdom was still present in Russia during the mid 19th century. Nevertheless by 1861 the emancipation statutes of the Serfs had finally been issued. How was it that despite there being hostility from the gentry and nobility to the destruction of Serfdom and the centrality of which Serfdom had in Russian society, was Emancipation of the Serfs able to occur in 1861. Did the emancipation of the Serfs take place due to Alexander II humanitarian concerns and sympathy towards Serfdom or was the emancipation of the Serfs an attempt for Russia to grow economically as well as politically in an attempt to retain its world status? These questions have been debated as many historians argue that the reasons for the Serfs being emancipated were due to economical, political, military and moral concerns. Russia during the mid 19th century was economical stagnated in comparison to countries such as Britain who saw a great economic boom through the industrial revolution, which consequently saw the boom of railways across Britain. ...read more.

It can be argued that the causation of the Serfs being liberated by Tsar Alexander II were to with economic, political, military and moral concerns. Nevertheless the idea of Tsar Nicholas II being labelled as a Tsar Liberator is strongly debated. In order for someone to be known or portrayed as a Liberator, they must give freedom to a person/group. The freedom received by the Serfs many feel left them worse off. Despite this so called Liberation of the Serfs occurring it was not the Serfs who were benefiting but more so the landlords.5 This was the case as the statues proposed that through emancipation of the Serfs, the Serfs were able to buy the land they worked on by paying redemptions over 49 years at an interest rate of 6%. The land, which they received, was usually narrow strips of poor land, which was not very fertile. 6 It is significant to take into account that despite the fact the Serfs were given personal freedom, they were not free in the sense that they were initially paid a very small amount for their work. Hence the Serfs were naturally financially instable; therefore it was ironic that such interest was placed on their land as they were not able to pay off their 49-year redemption including the interest placed on their land. As a result many Serfs found themselves in a worse off situation to the extent where their children were brought up on the burden of having to pay off the excess (and not achievable) ...read more.

Moreover it can be argued that in America the black slaves evidently witnessed a better life (despite it taking several years) whereas the Serfs were witnessing a worse life hence it was the consequences of the liberation of the Serfs which caused Alexander II's Liberator label to be questioned. Overall despite the Serfs receiving no genuine liberty11 one can argue that liberation did occur in the sense that an individual no longer owned the Serfs. However the extent of liberation is questioned by the situation of which the Serfs were left in as a consequence of emaciation. Russia had promised to give a new dawn to the Serfs but then left them in darkness.12 Nevertheless historians such as Terence Emmons describe Alexander II and the reforms as "probably the greatest single piece of state directed engineering in modern European history before the twentieth century.13 In conclusion I believe that despite Liberation was given on a general basis to the Serfs the way in which Liberation was given to them put the Serfs back to their social hierarchy in society as the benefit which occurred from the Liberation were very minimal and instead of making the Serfs better off caused them to become worse off. Hence it is a bit optimistic to call Alexander II a Tsar Liberator when infact his intentions for liberating the Serfs were more to do with pragmatic concern regarding Russia's economy, military and world status, than they were to do with giving the Serfs genuine liberty. ...read more.