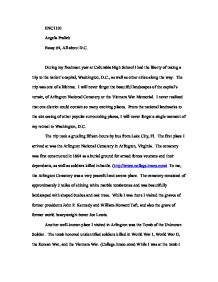 ENC1101 Angela Fralick Essay #4, All about D.C. During my freshmen year at Columbia High School I had the liberty of taking a trip to the nation's capital, Washington, D.C., as well as other cities along the way. The trip was one of a lifetime. I will never forget the beautiful landscapes of the capital's terrain, of Arlington National Cemetery or the Vietnam War Memorial. I never realized that one district could contain so many exciting places. From the national landmarks to the site seeing of other popular surrounding places, I will never forget a single moment of my retreat to Washington, D.C. The trip took a grueling fifteen-hours by bus from Lake City, Fl. The first place I arrived at was the Arlington National Cemetery in Arlington, Virginia. ...read more.

Another well-known place I visited in Arlington was the Tomb of the Unknown Soldier. The tomb honored unidentified soldiers killed in World War I, World War II, the Korean War, and the Vietnam War. (College.hmco.com) While I was at the tomb I had the privilege of watching the changing of the guard. The changing of the guard was a ceremony held during the day where the soldier that is guarding the tombs changed out with another soldier. After I visited in Arlington, Virginia, I then moved on to Washington, D.C. The first place I visited was the United States Capitol Building. I waited in line for four hours to gain entrance to the building. I was awestruck by the beauty of the Capitol. ...read more.

The Vietnam Wall is made of inscribed marble and is five hundred feet long and ten feet high. The wall contains the names of more than fifty-eight thousand soldiers who passed away during the Vietnam War. (www.http://dcpages.com/). As I strolled along the walkway that followed the wall, I was engulfed with pride and respect for the men who died for the United States during the war of Vietnam. The park around the wall was dazzling as well. The grounds were nicely kept, with the lawns mowed fresh and shrubs trimmed to perfection. My trip to Washington D.C. was wonderful. Almost every area of Washington D.C. was craftily landscaped and cared after. Having the opportunity to visit the United States Capitol was one of a lifetime. From Arlington Cemetery to the Vietnam War Memorial, I will never forget the fun and exciting places I had the chance to visit. ...read more.