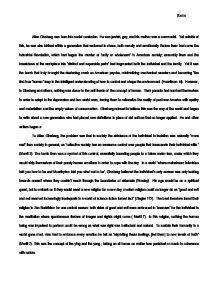 Allen Ginsberg was born into social confusion. He was jewish, gay, and his mother was a communist. Yet outside of this, he was also birthed within a generation that wallowed in chaos, both morally and emotionally. Before them had come the Industrial Revolution, which had begun the murder of "unity or wholeness" in American society; assembly lines and the breakdown of the workplace into "distinct and separable parts" had fragmented both the individual and the family. Yet it was the bomb that truly brought the deafening crush on American psycha, minimalizing mechanical wonders and becoming "the first true "human" leap in the intelligent understanding of how to control and shape the environment (Henrikson xi). However, to Ginsberg and others, nothing was closer to the anti thesis of the concept of human. Their parents had numbed themselves in order to adapt to the depression and two world wars, forcing them to rationalize the reality of post-war America with apathy and materialism and the empty values of consumerism. Ginsberg refused to believe this was the way of the world and began to write about a new generation who had placed new definitions in place of old notions that no longer applied. He and other writers began a To Allen Ginsberg, the problem was that in society the existence of the individual in isolation was naturally "more real" than society in general, as "collective society has an awesome control over people that transcends their individual wills." (Merril 3) The bomb then was a symbol of this control, essentially bounding people to a future under fear, under which they would strip themselves of their purely human emotions in order to cope with the day. In a world "where mainstream television told you how to be and Mcarthyism told you what not to be", Ginsberg believed the individual's only answer was only looking inwards oneself where they couldn't reach through the boundaries of externals (Wooley). ...read more.

(Schumaker 629). Lines such as "I dare your Reality..I turn the wheel of Mind on your three hundred tons..My oratory advances on your vaulted mystery" are the polar anti-thesies of the beauty of the "sparrows waked whistling through marine Street's summer green leafed trees." Protesting such atrocities of nature by nature by meditating on train tracks bound to deliver nuclear material, the recitation of Plutonium Ode would be needed inas his defense, adding parts to it spontaneously like "breathing silent Prisoners, witnesses, Police- the stenographer yawns into her palms" Sunflower Sutra is very much the same, written he was traveling with Kerouac and viewed a sunflower which was being afflicted with the waste that came as trains passed, its wheels unaware of the "indignity" it offered the poor flower (Schumaker 632). The subsequent contrast he painted was versed in the lines "we're not our skin of grime, we're not a dread black dusty imageless locomotive, we're all beautiful golden sunflowers." In this description, Ginsberg felt like he was taking up the "whitemanesque celebration" of becoming America through telling a lucid moment which could apply to a majority of Americans. Dylan picked this up better than anyone, evident in his verses describing "a young child beside a dead pony" and the"white man who walked a black dog" in "The Times.." Even keener contrast appears when he muses "I change my no pets allowed sign to a home sweet home sign and wonder why I haven't any friends" (Dylan) This social conscious and use of contrast gave the poet singer the "whitmanesque...I am America" perspective where he could speak for men who weren't even of his own color. "Hurricane" was the epitome of this, Sunflower Sutra Voice represents the spirits, if not actual experiences, of his readers. "It occurs to me I am America" 219 even though un American "whitmanesque celebration of self " "gone to seed and suffering the indignity of the discarded refuse" "they came upon an old, battered sunflower, grimy from the passing ...read more.

The Zen of it all , of all the nuclear protest, all the civil liberty, all the cries for a sympathetic America become one with the combination of these three. Their memory is like a burning mystic sign that has no form, only emotion, bright enough to reinvigprate the young masses in every generation to the crazed motion and the crazed search and the frenetic fraticness of the freedom of sensuality with the keenness and sharpness of political reality like a goddamn shard that cuts us at the arm just to prove we still bleed . As long as it burns, the land will breath even under the lack of life in the H-bomb oxygen starved skinny era. As long as it burns, the hills will rise and fall with the pure schitzophrenic sanity of the wind, an echo that just whispers search on the end of our hope stricken ears against the fear ridden nuclear wet dreams of bodies sexed and eyes hallucinating vexed and the fallout of a demoralized Patriot and its Acts of jingoistic nuclear tendencies. When Dylan said Ginsberg needed to get out on the open road of the tour "to wake up America", he meant that he wanted his spirit to ride through the skeletal suburbs warning the kids of the inhumanity and callousness stalking the land. I hear his voice and and see their protest so well, like "Blood writ in Blood", haunting my daytime dreams with hazy invocations of what we truly can be. Knowing that there is a generation who also feels the same burning in the center of the heart gives me strands of hope that somehow we can overcome the same inhumanity in this age of faceless terrorism that shows no distinction between America and the West. With a tear off the edge of the holy cheek, emblematic of the disunity of our feelings, these men push through our insides to assure us these expressions are what will take us whole. ...read more.