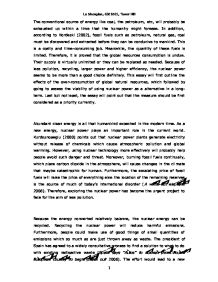 The conventional source of energy like coal, the petroleum, etc, will probably be exhausted up within a time that the humanity might foresee. In addition, according to Hordeski (2002), fossil fuels such as petroleum, natural gas, coal must be discovered and extracted before they can be conducive to mankind. This is a costly and time-consuming job. Meanwhile, the quantity of these fuels is limited. Therefore, it is proved that the global resources consumption is undue. Their supply is virtually unlimited or they can be replaced as needed. Because of less pollution, recycling, larger power and higher efficiency, the nuclear power seems to be more than a good choice definitely. This essay will first outline the effects of the over-consumption of global natural resources, which followed by going to assess the viability of using nuclear power as a alternative in a long-term. Last but not least, the essay will point out that the measure should be first considered as a priority currently. Abundant clean energy is all that humankind expected in the modern time. As a new energy, nuclear power plays an important role in the current world. Kurdsunoaeglu (2000) points out that nuclear power plants generate electricity without release of chemicals which cause atmospheric pollution and global warming. However, using nuclear technology more effectively will probably help people avoid such danger and threat. Moreover, burning fossil fuels continually, which place carbon dioxide in the atmosphere, will cause changes in the climate that maybe catastrophic for human. ...read more.

This means if only the produce of energy conversion keep balance, nuclear power can keep a higher efficiency. Opportunities for nuclear power are distributed broadly around the world, and nuclear power can help to address concerns over sustainable energy resources (Advertising in Cooperation in the Energy Futures of China and the United States, 2000). Engineering a new energy system will provide stewardship for all life on earth. Renewable energy is effectively infinite in supply. Presently the cost of using nuclear power is very high. This is due to that using the nuclear power needs a very high scientific and technological content. The deficiency in this plan is very clear. The process of using nuclear power is very complicated. Energy is generally divided into two categories: stored and transient. The stored forms of energy are potential, kinetic, internal, chemical, and nuclear. Chemical and nuclear energy represent the energy bound up in the structure of the molecular and atomic compounds (Hordeski, 2002). In the long and complicated course of exploring and using this energy, the sufficient manpower, physical and financial resources are unprecedentedly needed. The risk still exists in using the nuclear power. Elliott (1997) stresses the longer term prospects for nuclear power are unclear. Fission reactors use a fuel (uranium), which although still relatively abundant, will not be available indefinitely; fast breeder reactors, which in effect would stretch the availability of the fuel, have yet to be operated commercially and pose what some people regards as significant safety and security risks. ...read more.

Laurence (2002) maintains that 'Homo Technologist must implement the energy system that utilizes no fossil fuels. An energy system based on renewable energy and fusion reactors has been proposed.' Governments should establish special funds to support this scientific research. In addition, the public should be educated in how to use energy more effectively, because it is important to bear in mind that making the nuclear power become the focal point in the area of energy utilization in the future is an essential work for all the world. In conclusion, facing the environmental concerns and energy shortage, seeking available alternatives to replace the conventional energy sources becomes an urgent matter at the present time. There are several energy resources that are renewable. People have to find long-term alternatives to substitute fossil fuels to overcome the new energy challenges. Thus, nuclear power is going to become a new energy which has comparatively more powerful energy and higher efficiency. However, the use of nuclear power has some flaws. As mentioned in the former part, it always goes with the higher costs, potential risks and desires for highly advanced technology. Facing these problems, scientists are drawing some strong points to offset its own weakness, devoting themselves to developing the nuclear technology. Besides enhancing the use of nuclear energy security, the governments are also required to increase the funds to support the scientific research for making nuclear power more effective, safer and more economical to serve humanity. ?? ?? ?? ?? Lu Shenglan, 6501061, Tower Hill 1 ...read more.