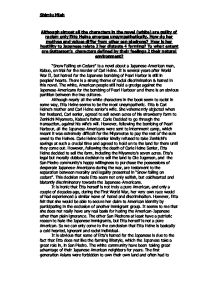 Although almost all the characters in the novel (white) are guilty of racism only Etta Heine emerges unsympathetically. How do her motives and values differ from other san piedrons? How is her hostility to Japanese relate 2 her distaste for farming?

Although almost all the characters in the novel (white) are guilty of racism only Etta Heine emerges unsympathetically. How do her motives and values differ from other san piedrons? How is her hostility to Japanese relate 2 her distaste 4 farming? To what extent are Gutterson's characters defined by their feelings 2 their natural environment? "Snow Falling on Cedars" is a novel about a Japanese-American man, Kabuo, on trial for the murder of Carl Heine. It is several years after World War II, but hatred for the Japanese bombing of Pearl Harbor is still in peoples' hearts. There is a strong theme of racial discrimination & hatred in this novel. The white, American people still hold a grudge against the Japenese-Americans for the bombing of Pearl Harbour and there is an obvious partition between the two cultures. ...read more.

However, following the death of Carle Heine Senior, Etta Heine decided to sell the farm, including the Miyamoto's seven acres. Etta's legal but morally dubious decision to sell the land to Ole Jugerson, and the San Piedro community's happy willingness to purchase the possessions of desperate Japanese-Americans during the war, are testament to the separation between morality and legality presented in "Snow falling on cedars". This decision made Etta seem not only selfish, but coldhearted and blatantly discriminatory towards the Japanese-Americans. It is ironic that Etta herself is not truly a pure American, and only a couple of decades ago, during the First World War, her very own race would of had experienced a similar wave of hated and discrimination. ...read more.

They constituted a large base of permanent cheap labour for the annual strawberry picking harvest. Etta was more of a city girl and did not like the rural lifestyle and defianately opposed to the Japanese intergrating into society and especially becoming friends with her husband. At her first opportunity she sold the farm and retreated from the lifestyle that made her come into contact with the American Japanese workers. I think that she could not express her feelings to Carle Heine Senior, so she expressed her hatred for the lifestyle by hating the American Japanese that aided the lifestyle to be successful. We see the Japanese in the novel to be descent, hard working people, which makes it easier for us to judge Etta. It is in her nature to be cruel and ruthless in her ways. Shimlu Miah ...read more.