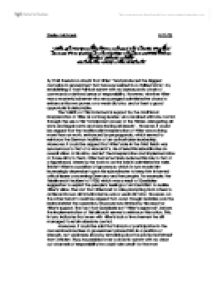 &quot;Although Nazi government was confused and chaotic, it worked because it was guided by one ideology and because Hitler always retained ultimate control.&quot; Examine the validity of this statement.

Shelley Michaels 8/11/03 "Although Nazi government was confused and chaotic, it worked because it was guided by one ideology and because Hitler always retained ultimate control." Examine the validity of this statement. By 1945 there is no doubt that Hitler " had produced the biggest confusion in government that has ever existed in a civilized state", by establishing a Nazi Political system with no bureaucratic chain of command or defined areas of responsibility. However, whether Hitler was a masterful schemer who encouraged administrative chaos to enhance his own power, or a weak dictator, and at best a good opportunist is debatable. The Validity of this statement is support by the traditional interpretation of Hitler as a strong leader, who retained ultimate control through the use of his "omnipotent power of the F�hrer, abrogating all state and legal norms and sanctioning all deeds". However, it could be argued that the traditionalist interpretation of Hitler was nothing more than an myth, enhanced by propaganda, which served to reinforce the German tradition of an authoritarian leadership. Moreover, it could be argued that Hitler's role in the third Reich was synonymous to that of a Monarch's. He offered his subordinates an overall vision of his aims, and left the interpretation and implementation of those aims to them. ...read more.

For example, Hitler promoted the notion of a "united family", yet his propaganda aimed at youths achieved the complete opposite, by take the children away from the family. Thus creating internal conflict within families, instead of extinguishing them. Moreover, Hitler claimed to believe that the group was more important than the individual, yet he had establish a political system that encouraged officials to put themselves before there own party. This in turn served to limit the efficiency of the Government, since officials were too busy competing amongst themselves to concentrate on achieving the aims of the party. It could be said that Hitler's laziness was the cause of the ambiguous nature of nazi Ideology. In childhood Hitler had been described as "an idle, unmotivated, underachieving" student. These qualities in Hitler were reflected in his ideology. Instead of using his initiative to come up with a more original ideology he simply promoted more extreme explicit versions of already existing views that had already be aspect amongst the general population well before the Nazi era. For example, the church's belief that contraception should not be used, was a belief very similar to of Nazism. Moreover, the very emblem of Nazism, the Swastika, serves to emphasize the Hitler's laziness, considering he had taken the swastika from an image of Genghis Kahn he saw in a book. ...read more.

However, is overwhelming popularity, reinforced by the F�rher principle, which claimed he was infallible, had basically allowed him to get away with murder. It could be argued that he at least possessed the appearance of a strong dictator. However, on the other hand it could be argued, that his true weakness laid not in the way others perceived him but the way he perceived himself. " The day on which Hitler started to believe his own myth marked in a sense the beginning of the end of the 3rd Reich". It could be concluded that, the polycratic nature of the 3rd Reich was deliberately extended by Hilted, partly in order to "divide and rule", and party due to his belief that "social Darwinism" would lead to the best people triumphing anyway. On the other had his could be argued that. Hitler was a weak dictator who was not fully in control. Rather than implementing a plan, worked out years prior to his arrival into power, Hitler responded to the circumstances in which he found himself. The Nazi government evolved into a system of chaos not because he wanted it to be so , but because he did not have the power to streamline the system. Moreover, it could be said, that whether the chaotic system was intentional all not is irrelevant, since either was he was position that worked towards his advantage. ...read more.