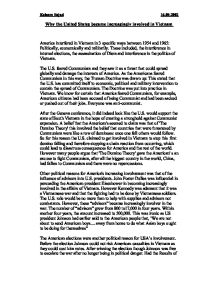 America interfered in Vietnam in 3 specific ways between 1954 and 1965: Politically, economically and militarily. These included, the interference in internal elections, the assassination of Diem and interference in the politics of Vietnam.

America interfered in Vietnam in 3 specific ways between 1954 and 1965: Politically, economically and militarily. These included, the interference in internal elections, the assassination of Diem and interference in the politics of Vietnam. The U.S. feared Communism and they saw it as a threat that could spread globally and damage the interests of America. As the Americans feared Communism in this way, the Truman Doctrine was drawn up: This stated that the U.S. has committed itself to economic, political and military intervention to contain the spread of Communism. The Doctrine was put into practice in Vietnam. We know for certain that America feared Communism, for example, American citizens had been accused of being Communist and had been sacked or pushed out of their jobs. Everyone was anti-communist. After the Geneva conference, it did indeed look like the U.S. would support the state of South Vietnam in the hope of creating a stronghold against Communist expansion. ...read more.

The U.S. role would be no more than to help with supplies and advisors not combatants. However, these "advisors" became increasingly involver in the war. The number of "advisors" grew from 800 to17,000 in four years. Within another four years, the amount increased to 500,000. This was ironic as US president Johnson had earlier said to the American people that, "We are not about to send American boys.... away from home to do what Asian boys ought to be doing for themselves" The American elections were another political reason for USA's involvement. Before the election Johnson could not risk American casualties in Vietnam as they could cost him votes. After winning the election though Johnson was free to escalate the war after no longer being in political danger. Had the Results of the elections gone the other way, huge involvement in Vietnam could not have existed. The political motives behind the conflict leads to military involvement in Vietnam. ...read more.

My final point is American Propaganda. The US government felt they had an image to protect, and with a new president (Kennedy) wanting to make impact on the world, he saw involvement in Vietnam as the perfect opportunity. This could also be reflected in the present, With George Bush wanting to make his mark in history by going to war on Iraq, and dealing with terrorist attacks. I personally believe that because the American's feared Communism so much and this coupled with the Korean War and America's seemingly success, that America had to be seen to be doing something to stop the spread of Communism. I think that Johnson intended to send American combatants all a long and deceived the American people into believing otherwise. I believe the Domino Theory was a form of propaganda so the American people would gain support, which would boost morals for troops. It would probably have been wiser for the US to support Ho's regime from the beginning and attempt to influence the situation to their own advantage. Kaleem Sajad 16.09.2002 Why the United States became increasingly involved in Vietnam ...read more.