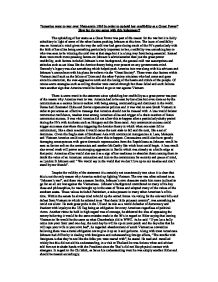 &quot;America went to war over Vietnam in 1965 in order to uphold her credibility as a Great Power&quot; How far do you agree with this judgement?

"America went to war over Vietnam in 1965 in order to uphold her credibility as a Great Power" How far do you agree with this judgement? The upholding of her status as a Great Power was part of the reason for the war but it is fairly subsidiary in light of some of the other factors pushing Johnson at this time. The issue of credibility was on America's mind given the way the cold war had gone during much of the 50's particularly with the faith of her allies being something particularly important to her, credibility was something key to who was seen to be winning the cold war at that stage but it is a long way from being essential. Instead there were much more pressing factors on Johnson's administration than just the great power credibility, such factors included Johnson's own background, the general cold war assumptions and attitudes such as set ideas like the domino theory being ever present on any governments mind. Kennedy's legacy was also something which helped push America into war along with his advisers and Johnson's conundrum with his plans for reform via the "Great Society". There were also factors within Vietnam itself such as the failure of Diem and the other 9 prime ministers who had come and gone since his execution, the ever-aggressive north and the losing of the hearts and minds of the people. ...read more.

Of course one of these assumptions was the one of Americas credibility as a great power but there were others. The cold war was seen as a struggle against monolithic communist bloc intent upon subverting free and independent states and spreading Soviet power under the guise of communism. Actions by all communist parties and regimes were determined in Moscow. Values of communism ran totally counter to those of capitalistic America and the free world in the West, the USSR policy of world domination was something the US had to stop in order to stop such values being spread throughout the world. The way to stop it was through pro-active policies throughout the world by supporting pro-western regimes against communist infiltration through financial, diplomatic and if needs be military support. The communist threat was similar to the fascist threat back in the 1930's and the mistakes of then could not be repeated. Force had to be met with force. Negotiated agreements were useless unless they were based on ones military superiority or after a victory in a war. Along with these regular woes faced by all the presidents though there was also Johnson's own worry about the implementation of his "great society", which is where his heart truly was. ...read more.

Rusk was also growing tired of the South Vietnamese with a consensus among the advisers that something had to be done about the situation. By spring 64, US intelligence estimated South Vietnam would stand for about a few months at best. Political instability was ubiquitous with 6 changes in government. The countryside was communist controlled with towns becoming fortresses under siege. The loss of Diem had created a huge political vacuum. General Minh took over from Diem in 63 but he had no experience, programme or support and South Vietnam continued to deteriorate. The January coup in 64 was motivated simply by personal ambition rather then a sense of public ambition continuing the perpetual down spiral with anarchy taking rule. Not only was the regime in constant crisis but also there was an intensification in communist military activity with Hanoi pledging to destroy the South Vietnamese army, destroy the hamlets and engage in an offensive to destroy the government in December 1963. This caused an expansion in numbers and quality of the Vietcong troops, greater infiltration and a campaign in South Vietnam to be run by a top North Vietnam General. The Vietcong were striking at will against Americans in South Vietnam with a US air base near Saigon greatly damaged in November 1964. ...read more.