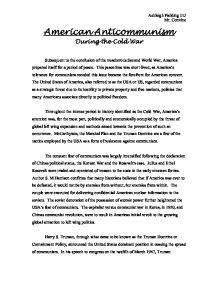 American Anticommunism During the Cold War Subsequent to the conclusion of the treacherous Second World War, America prepared itself for a period of peace. This peacetime was short-lived, as America's tolerance for communism receded this issue became the forefront for American concern. The United States of America, also referred to as the USA or US, regarded communism as a strategic threat due to its hostility to private property and free markets, policies that many Americans associate directly to political freedom. Throughout the intense period in history identified as the Cold War, America's attention was, for the most part, politically and economically occupied by the threat of global left wing expansion and methods aimed towards the prevention of such an occurrence. McCarthyism, the Marshal Plan and the Truman Doctrine are a few of the tactics employed by the USA as a form of resistance against communism. The constant fear of communism was largely intensified following the declaration of Chinas political status, the Korean War and the Rosevelt's case. ...read more.

Cowie, a well-noted author, considers Truman's speech to be the trigger for the transition of the Cold War from a temporary state to a permanent quarrel as it directly states America's aggressive approach towards communist countries. Congress responded to Truman's appeal by allocating the required funds along with US troops to administer the reconstruction. In an extract from Truman's address America's adoption of the dominant role in the anticommunist conflict is evident. "The seeds of totalitarian regimes are nurtured by misery and want. They spread and grow in the evil soil of poverty and strife. They reach full growth when the hope of the people for a better life has died. We must keep that hope alive." The Marshal Plan was also established upon similar principles. The American Secretary of State George C. Marshal produced the Marshal Plan, or European Recovery Program in 1947, aspiring towards the rehabilitation of European nations devastated by the war. ...read more.

Hoover Claimed that, "Every American communist was and is, potentially an espionage agent for the Soviet Union" McCarthy's tactics included treating communists as criminals and according to online historian Ellen Schrecker, this enhanced their public image as threatening to America's national security. This witch-hunt and anticommunist hysteria later became known as McCarthyism. Professor Ralph Brown, a Yale School lecturer, conducted a systematic survey of the economic damage bought about by the McCarthy era. He concluded that well over ten thousand people were relieved of their jobs as a result of McCarthy's crusades. This sum however is noted not to be including those who resigned, failed applicants, and men and women who were ostensibly dismissed. Nonetheless, McCarthy proceeded to successfully ignite a nation wide belligerent anticommunist campaign. The Cold War dominated international relations in excess of forty years and was indefinitely predominantly characterized by the tension between capitalism and communism. Cowie maintains that it was this atmosphere of mutual accusation and suspicion that fueled the Cold War for such a hostile period in history. America's anticommunist defense tactics, McCarthyism, the Marshal Plan, and the Truman Doctrine signified their immense fear of left wing philosophies. ...read more.