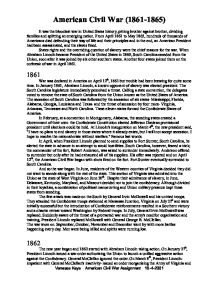 American Civil War (1861-1865) It was the bloodiest war in United States history, pitting brother against brother, dividing families and splitting an emerging nation. From April 1861 to May 1865, hundreds of thousands of Americans died defending their way of life and their principles and in the end, an American President had been assassinated, and the slaves freed. States rights and the overriding question of slavery were the chief reasons for the war. When Abraham Lincoln became President of the United States in 1860, South Carolina seceded from the Union, soon after it was joined by six other southern states. Another four states joined them on the outbreak of war in April 1861. 1861 War was declared in America on April 12th, 1861 but trouble had been brewing for quite some time. In January 1861, Abraham Lincoln, a known opponent of slavery was elected president. The South Carolina legislature immediately perceived a threat. Calling a state convention, the delegates voted to remove the state of South Carolina from the Union known as the United States of America. The secession of South Carolina was followed by the secession of six states- Mississippi, Florida, Alabama, Georgia, Louisiana and Texas- and the threat of secession by four more- Virginia, Arkansas, Tennessee and North Carolina. These eleven states formed the Confederate States of America. In February, at a convention in Montgomery, Alabama, the seceding states created a Government of their own- the Confederate Constitution elected Jefferson Davis as provisional president until elections could be held. At Lincoln's inauguration on March 4th, the new president said, "I have no plans to end slavery in those states where it already exists, but I will not accept secession. I hope to resolve the national crisis without warfare." Famous last words. In April, when President Lincoln planned to send supplies to Fort Sumter, South Carolina, he alerted the state in advance in an attempt to avoid hostilities. ...read more.

His men cut a path 300 miles in length and 60 miles wide as they passed through Georgia, destroying factories, bridges, railroads, and public buildings. After marching through Georgia for a month, Sherman stormed Fort McAllister on December 13 and captured Savannah itself eight days later. Continuing his policy of taking the offensive at any cost, General John Hood bought his reduced army before the defences of Nashville, where General George B. Thomas repulsed it on December 15-16, in the most complete victory of the war. 1865 January marked the beginning of the fall of the Confederacy. Transportation problems and successful blockades caused severe shortages of food and supplies in the South. Starving soldiers began to desert Lee's forces and although President Jefferson Davis approved the arming of slaves as a means of augmenting the shrinking army, the measure was never put into effect. In February, General Sherman moved from Georgia through South Carolina, destroying almost everything in his path. In late February, Confederate President Jefferson Davis agreed to send delegates to a peace conference with President Lincoln and Secretary of State William Stewart but insisted on Lincoln's recognition of the South's independence as a prerequisite. Lincoln refused, and the peace conference never occurred. On March 25, General lee attacked General Grant's forces near Petersburg but was defeated- attacking and losing again on April 1. On April 2, Lee evacuated Richmond, the Confederate capital and headed west to join with other forces. General Lee's troops were soon surrended and on April 7, Grant called upon Lee to surrender. On April 9, the two commanders met at Appomattox Courthouse and agreed on the terms of surrender. Lee's men were sent home on parole - soldiers with their horses and officers with their side arms. All other equipment was surrendered. On April 14, as President Lincoln was watching a performance of "Our American Cousin" at Ford Theatre in Washington D.C., he was shot by John Wilkes Booth, an actor from Maryland who was obsessed with avenging the confederate defeat. ...read more.

Another quarrel between the North and South, and perhaps the most emotional one, was over the issue of slavery. Farming was the South's main industry and cotton was the primary farm product. Not having the use of machines, it took a great amount of human labour to pick cotton. A large number of slaves were used in the South to provide the labour. Many slaves were also used to provide labour for the various household chores that needed to be done. Many Northerners thought that owning slaves was wrong, for any reason. Some of those Northerners loudly disagreed with the South's laws and beliefs concerning slavery. Yet slavery had been a part of the Southern way of life for well over 200 years. The Constitution of the United States guaranteed the right to own property and protected against seizure of property. A slave was property. The people of the Southern States did not like the northern people telling them that owning slaves was a great wrong. A person either believes that slavery is right or that slavery is wrong, so how can two people arguing over such an issue compromise? Abraham Lincoln was elected President of the United States in 1860. He vowed to keep the country united and the new western territories free from slavery. Many Southerners were afraid that he was not sympathetic to their way of life and would not treat them fairly. South Carolina was the first State to secede from the United States soon after the election of Abraham Lincoln. Six other Southern States quickly followed and also seceded. These States joined together and formed a new nation that they named the Confederate States of America. Jefferson Davis was elected their first president. On April 12, 1861, the Confederate States of America attacked Fort Sumter in South Carolina, which was held by Federal (Union) troops and flew the United States flag. As open conflict increased, other United States seceded and joined the Confederacy. The fighting of the Civil War would take four long years to end. This country would remain united and slavery would come to an end. ...read more.