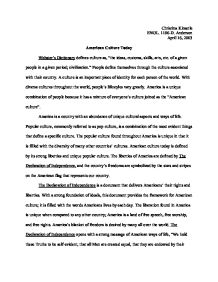 Christina Kimerle ENGL. 1106-D. Anderson April 16, 2003 American Culture Today Webster's Dictionary defines culture as, "the ideas, customs, skills, arts, etc. of a given people in a given period; civilization." People define themselves through the culture associated with their country. A culture is an important piece of identity for each person of the world. With diverse cultures throughout the world, people's lifestyles vary greatly. America is a unique combination of people because it has a mixture of everyone's culture joined as the "American culture". America is a country with an abundance of unique cultural aspects and ways of life. Popular culture, commonly referred to as pop culture, is a combination of the most evident things that define a specific culture. The popular culture found throughout America is unique in that it is filled with the diversity of many other countries' cultures. American culture today is defined by its strong liberties and unique popular culture. The liberties of America are defined by The Declaration of Independence, and the country's freedoms are symbolized by the stars and stripes on the American flag that represents our country. The Declaration of Independence is a document that delivers Americans' their rights and liberties. With a strong foundation of ideals, this document provides the framework for American culture; it is filled with the words Americans lives by each day. The liberation found in America is unique when compared to any other country; America is a land of free speech, free worship, and free rights. ...read more.

The Great Plains are home to the prairies and prairie heroes. "Wyatt Earp, and "Wild Bill" Hickok, two legendary lawmen, ruled the frontier towns of Dodge City and Abilene" (Millet). This region has played a more important role in the more modern culture of America. The East has much of a historical aspect of American culture. New England is the home of the pilgrims, the witchcraft trials, and sexy northern accents without any r's. Many immigrants came to America through the Northern harbors. With a massive flood of original immigrants in the New York harbors, New York City is still one of the most diverse cities in America. The East Coast is home to the largest military bases and the American militaries are the strength behind our freedoms. The Pacific States include Hawaii and Alaska. With volcanoes and clear waters, Hawaii has become a large tourist operation of America. Many people travel the Hawaiian islands for peaceful vacations. The rigid Alaskan state is home of snow, igloos, and Eskimos. With a distinct culture based on the land and family, Alaskans live through many conditions that other Americans could never endure. The regions of the American lands have distinct individual cultures, but America is a blending of all of these cultures. American pop culture has many distinguishing characteristics. From A-Z you can find something that is unique to American culture. Amusement parks are America's way of combining the theater and the circus. ...read more.

Rachel Price is the daughter that uses her looks and materialistic ways of life to look stupid to the Congolese. Believing that her mirror is her most prized possession, Rachel gives a negative perspective of American girls. Leah Price is a typical American girl that idealizes her father, even after realizing his offensive ways she shows her love for him. One family's misperceptions gave the Congolese doubt in all American ways. Many foreign countries have an opinion, positive or negative, of Americans before they encounter them. The world understands the super-power of America and is respected by many countries. Without the luxuries and freedoms that many Americans take for granted every day, many foreign people are envious of the American way of life. The United States Armed Forces fight everyday to protect the independence of American lands. American culture is relevant to society because people should be aware of what is fought to protect in each conflict this country faces with other countries. The freedoms given in America are protected by the military that must fight when the country and its culture is threatened. This topic was important to research because it is important to know the characteristics of America life that is the culture. Living in such a free country is a great privilege, and many Americans take that privilege for granted. The culture that is lived each and every day by everyone in America should be clear and evident, there should never be a question as to why life is lived a certain way. Appreciation for culture and its diversity is important in American life. ...read more.