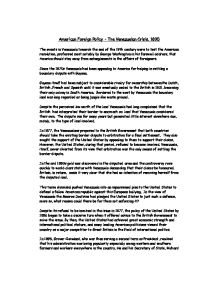 American Foreign Policy - The Venezuelan Crisis, 1895 The events in Venezuela towards the end of the 19th century were to test the American resolution, professed most notably by George Washington in his farewell address, that America should stay away from entanglements in the affairs of foreigners. Since the 1870s Venezuela had been appealing to America for helping in settling a boundary dispute with Guyana. Guyana itself had been subject to considerable rivalry for ownership between the Dutch, British, French and Spanish until it was eventually ceded to the British in 1831, becoming their only colony in South America. Bordered to the west by Venezuela the boundary land was long regarded as being jungle like waste ground. Despite the perceived low worth of the land Venezuela had long complained that the British had interpreted their border to encroach on land that Venezuela considered their own. The dispute ran for many years but generated little interest elsewhere due, mainly, to the type of land involved. In 1877, the Venezuelans proposed to the British Government that both countries should take the existing border dispute to arbitration for a final settlement. ...read more.

This act by the US Congress gave the Venezuelans what they had wanted since 1877 - full American support of Venezuela. With Cleveland's approval, Olney prepared a statement of the case in July 1985 which was presented to the British Government. In his statement Olney protested vehemently against the enlargement of Guyana at the expense and defiance of Venezuela. Implicit in his text was the assertion that Britain had already violated the Monroe Doctrine of 1823. (The Monroe Doctrine declared that any attempt by a European power to control any nation in the Western Hemisphere would be viewed as a hostile act against the U.S.) Olney stated, with no justification, that the Monroe Doctrine had the full status of international law. Britain, already occupied with colonial problems in South Africa, finally responded in December of 1895. The Prime Minister, Lord Salisbury, countered Olney's contentions, refuting Olney's assertion that the Monroe Doctrine was applicable to the border dispute. Going further he asserted that the only parties competent to decide whether arbitration was "a suitable method of procedure ... are the two parties whose rival contentions are in issue. ...read more.

Realistically Britain, already faced with a state of war in South Africa, had no intention of having any violent confrontation with the United States. The British Government, therefore, stepped up its exchange of diplomatic letters with the United States and Venezuela with the aim of bringing an early end to the dispute. Cleveland, similarly did not really want to go to war over what he viewed as a 'half century old surveyor's mistake'. When London agreed to refer the matter to an international tribunal the Cleveland administration declared victory for itself and its liberal interpretation of the Monroe Doctrine. By 1899, when the panel awarded most of the land in question to the British, the dispute had largely been forgotten. The escalation of this dispute by the support that Cleveland gave to Venezuela and the decision made by Britain to placate the Americans made it apparent that there had been a notable shift in world power. Britain's decision to placate America whilst continuing its difficulties with the Germans in South Africa also sowed the seeds of the long-standing alliance between Britain and the United States. Reference sources: The United States in the World - Volume 1 H.W.Brands Encyclopaedia Britannica The world factbook - Venezuela CIA American Diplomacy in the 20th Century State Magazine 'guyanaca.com' Diane Bachofer June 2002 ...read more.