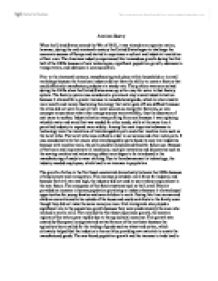 American Idustry When the United States entered the War of 1812, it was viewed as an agrarian nation; however, during the mid nineteenth century the United States began to challenge the economic success of Europe and started to experience a cultural and industrial revolution of their own. The American industry experienced this tremendous growth during the first half of the 1800s because of new technologies, significant population growth, advances in transportation, and advances in communication. Prior to the nineteenth century, manufacturing took place within households or in small workshops because the American industry did not have the ability to create a factory that could efficiently manufacture products at a steady rate. This problem was soon solved during the 1840s when the United States came up with a way for water to fuel factory system. The factory system was considered a prominent step toward industrialization because it allowed for a greater increase in manufactured goods, which in return lead to more wealth and money. ...read more.

During this time women and children were allowed to be outside of the house and could contribute to the family even though they did not make the same money as men. Irish immigrants also played a significant role in the population growth because they were predominately the ones who worked in textile mills. Not only did the Northeast experience growth, the western regions of the nation grew rapidly due to the agricultural economy. This growth was created by European immigrants and native farmers of the northeast because the agriculture boom called for the trading of goods such as wheat and cotton, which ultimately helped fuel the industry in the north by providing raw materials to create the manufactured goods. The new found population growth and the increase in trade lead to the need of transportation and communication because those two are vital to make an industry successful. From 1790 until the beginning of the nineteenth century, the United States relied on roads for internal transportation and communication; however, the roads were not adequate enough for the nation's growing industry. ...read more.

This discovery provided a benefit of communication between railroad operators in different cities, which ultimately helps the transportation cycle run smoother and a little faster because it allowed the operators to alert others of schedule changes and breakdowns. Furthermore, the telegraph supplied a writing source for American journalism in the city. Journalism was important in the city because it help the city to relay information to its people that used to take months for them to find out. The manufacturing and employment in newspaper factories grew and even further helped the industrial revolution of America. American economy encountered the beginnings of an industrial revolution during the early nineteenth century, which transformed almost all areas of life in fundamental ways. The terrific growth in industry and life was the result of population growth, advances in technologies, transportation, and communication. Without the changes in industry throughout America, the gap between the North and South would not be as visible as they are in the late 1860s and so on. ...read more.