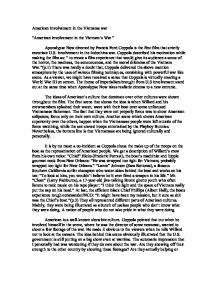 American Involvement in the Vietname war.

American Involvement in the Vietname war "American involvement in the Vietnam's War " Apocalypse Now directed by Francis Ford Coppola is the first film that strictly excoriate U.S. involvement in the Indochina war. Coppola described his motivation while making the film as: " to create a film experience that would give its audience a sense of the horror, the madness, the sensuousness, and the moral dilemma of the Vietnam War."(p.1) There was hardly a doubt that, Coppola delivered the above mention atmosphere by the uses of various filming techniques, combining with powerful war like scene. As a viewer, we might have received a sense that Coppola is virtually creating a World War III on screen. The theme of imperialism brought from U.S involvement stand out at the same time when Apocalypse Now takes realistic cinema to a new extreme. The ideas of American's culture that dominate over other cultures were shown throughout the film. The first scene that shows the idea is when Willard and his crewmembers splashed their water, wave with their boat over some unfocused Vietnamese fishermen. ...read more.

At last, the efficient black Chief Phillips (Albert Hall), the boats experience tough commander/NCO: "It might have been my mission, but it sure as shit was the Chief's boat."(p.3) They all represented different parts of American cultures. Mainly, they were being illustrated as a bunch of useless people who don't know what they were doing. A nation of people who do not take pride in what they were doing. American is a well-known show biz culture. Coppola pointed that out when he involved himself in the scene, where he was the director of some newscast, wanted to shoot a few footage of the war. He made it obvious to the viewers when he tells Willard not to look at the camera. The idea behind this scene obviously illustrated that the U.S. government is still putting on a big show even at wartime. The automatic impression that I personally had was wondering if they do care about the war. Are they showing off their strength to the other country by shooting these footages? Are they actually helping or rather using the people? ...read more.

It is even more ironic to see him congratulating Lance by word such as these: "It's an honor to meet you Lance. None of us are anywhere near your class, though...We do a lot of surfing around here, Lance."(p.4) It was such an unusual line from a Lieutenant to a lower rank solider. At background of this conversation, ironically we saw dead body carried away by the soldiers. Kilgore is just not playing his role right especially when he made nonsense comment such as these: "Some day this war's gonna end...."(p.4) I personally think that his comment is meaningless since it is commonly know that there is an end to everything. Moreover it is inappropriate for him to make that comment regarding his class. However, we can justify Coppola's intention, as a way to illustrate the viewers that Kilogore is just another American, which does not act out their role in the society. We had gathered enough evidences from the film to conclude ourselves that, the American's culture was just as wild and violence as a war. Coppola's ability to show this moral dilemma in his film without the help of any special effect is just simply taking film into another level. ...read more.