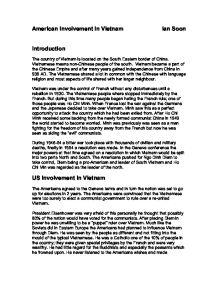 American Involvement in Vietnam Ian Soon Introduction The country of Vietnam is located on the South Eastern border of China. Vietnamese means non-Chinese people of the south. Vietnam became a part of the Chinese Empire and after many years gained independence from China in 938 AD. The Vietnamese shared a lot in common with the Chinese with language religion and most aspects of life shared with her larger neighbour. Vietnam was under the control of French without any disturbances until a rebellion in 1930. The Vietnamese people where stopped immediately by the French. But during this time many people began hating the French rule; one of those people was Ho Chi Minh. When France lost the war against the Germans and the Japanese decided to take over Vietnam. Minh saw this as a perfect opportunity to attack the country which he had been exiled from. After Ho Chi Minh received some backing from the newly formed communist China in 1949 the world started to become worried. Minh was previously was seen as a man fighting for the freedom of his country away from the French but now he was seen as siding the "evil" communists. During 1946-54 a bitter war took place with thousands of civilian and military deaths, finally in 1954 a resolution was made. In the Geneva conference the major powers at that time agreed on a resolution in which Vietnam would be split into two parts North and South. ...read more.

Additionally, there were dozens of hidden centres all over South Vietnam for squad and platoon leader, weapons and radio training. To ensure that the guerrillas understood why they were fighting, all training courses included political instruction. Most main force Vietcong troops were armed with Chinese versions of the Russian AK-47 submachine gun. They also used a range of Soviet and Chinese light and medium machine guns, For destroying armoured vehicles or bunkers, the Vietcong had effective rocket propelled grenades and rifles. Mortars were also available in large numbers and had the advantage of being very easy to transport. Many weapons, including booby traps and mines, were homemade in villages. The materials ranged from scavenged tin can to discarded wire, but the most important ingredients were provided by the enemy. In a year, dud American bombs could leave more than 20,000 tons of explosives scattered around the Vietnamese countryside. Guerrilla Tactics In December 1965, Ho Chi Minh and the North Vietnamese leadership ordered a change in a way the war in the South was to be fought. From now on, the Vietcong would avoid major battles with the Americans unless they were very likely to win. There would be more hit and run attacks and ambushes. To counter the American build-up, Vietcong recruitment would be stepped up and more North Vietnamese Army troops would be infiltrated into South Vietnam. The Vietcong, following the example of Chinese guerrillas before them, had always given the highest priority to creating safe base areas. ...read more.

3. Bombing: By continuing to bomb Vietnam Nixon would not seem to be backing down. In 1972 the North Vietnamese tried to take over South Vietnam but were unable to, this called President Nixon to settle this dispute. So in 1973 a peace agreement was signed and on March 1973 all American troops had left Vietnam. Consequences 1. Chemical warfare: this effected Vietnam's agriculture and the environment in general. Rivers and streams were poisoned by the chemicals. 2. Citizens: Huge loss of life, and emotional scaring. Many people were sick after being in contact with Agent Orange. Mines still laid across the country were a major risk. Napalm disfigured victims and killed many others. 3. Morals: Buddhist priests were very upset about what had become of their country. US forces supplied the people with many weapons and goods this created a large black market in the country. 4. Refugees: 5 million people were resettled from their homes; many towns were completely blown up. Many people looked for a better life by sailing away to a new home, these people were called "boat people" they hoped to land in accepting countries like Malaysia or Hong Kong. 5. US Troops: Many soldiers were affected by post traumatic stress, some of the troops got cancer after using chemical weapons. 30% of the American troops used heroin in Vietnam due to its price and availability many were addicted to it when the came back. Many people were very unwelcoming to the troops when the got back they did not receive the "heroes welcome" they expected. ...read more.