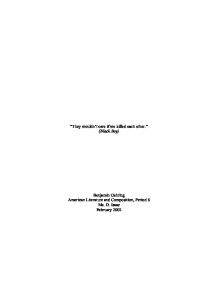 "They wouldn't care if we killed each other." (Black Boy) Benjamin Gehring American Literature and Composition, Period 6 Ms. D. Isaac February 2002 In 1883 the Southern states of the United States passed new laws which created several rules for the segregation of white and black people. Many of these laws, which are also called "Jim Crow Laws," said, for example, that black people could not have the same rights and opportunities as whites in schools and jobs. For example, it was unlawful for whites and blacks to attend school in of another color. The United States Supreme Court, the highest judicial tribunal in of the country, decided in 1896 that these laws were valid. The former slaves, who were freed in 1863 by President Abraham Lincoln, were in this time mistreated again. On December 1st 1955, Rosa Parks refused to give her seat on a bus in Montgomery, Alabama to a white passenger, as the Jim Crow laws required. After her arrest, many black people demonstrated against the Jim Crow laws and set a common goal of getting attention from the public about the mistreatment of blacks. ...read more.

Another very important part in the development of Richard's life is school. Richard graduates after 9th grade, which is very good for a black American in this time. When he is accused falsely by his teacher and Aunt Addie of spitting walnuts on the classroom floor, he pretends that he does not "know anything about that" (116) and does not tell Addie the truth until the evening. Even though he respects and protects his classmates, he fights them. Richard has the opinion that he can only be accepted and respected by beating up classmates. Almost everyday of school Richard "...was prepared to meet it. Upon what terms would [he] be allowed to remain upon the school grounds?" (136). School is was a very important issue. In the Jim Crow area and today it is the biggest advance to get respect in the environment. Richard doesn't like school even he is smart. After graduating Richard has to move on and keep supporting his family. Richard begins working after his mom falls sick and is not able to work to get money for the family. ...read more.

In conclusion, this book is one of a few books that explains and describes the racism and segregation of white and black people in the Jim Crow era in a truthful and detailed manner. However, racism is the topic of the theme. Black Boy is also very special because it reflects and shows the hardness of work for black people in a white environment. Also today there are many companies, offices, and even schools who still judge people by their skin color. The book represents the work environment of black with white people in a view, which was not easy to publish in 1945. It still is very important to remember the mistreatment of black people in their work at this time. Even though the book was published in 1945, 58 years ago, it is still one of the most popular novels about the mistreatment and lifestyles of black Americans. The Jim Crow era ended shortly after Martin Luther King Jr., the model demonstrating against these laws, was murdered April 4th 1968. It was probably the worst time period for black people in the last 100 years. ...read more.