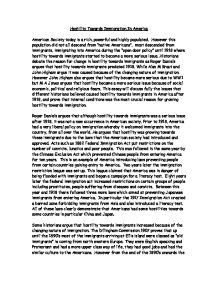 American Society today is a rich, powerful and highly populated

Higham also agreed with this view stating that " The coming of the new immigration had contributed to late 19th century xenophobia and its presence played a more crucial role in the 20th century. But at both times the intensity of the hostility reflected larger factors in the American situation". By 1920 there were many Americans who did not like the foreign immigrants they saw them as poor, dirty, unskilled, knowing very little English and with little money. Also by this time there was very little free land available for farming so many of the immigrants congregated in the cities, which were expanding rapidly. In addition to this they arrived in cities where they already had family and many of them were living in very poor conditions working in very poorly paid jobs. This led to social problems in these areas because they became run down, poverty stricken and overcrowding. Also the new immigrants tended to stick together which made them stick out from native born Americans. The size of the cities was rapidly increasing and this started to lead to social problems such as crime. The Americans started to blame the immigrants for these problems. Many journalists and politicians used statistics that showed high crime rates in areas where there were lots of immigrants. This was seen as proof that the immigrants were having a bad influence in the area. For some areas in the large cities they became so run down that they changed into poverty stricken ghettos. This contributed even more to the idea that the immigrants were lowering all the standards of the Americans. ...read more.

WW1 acted as a crucial catalyst in causing hostility towards immigrants in particular German immigrants and caused many people to want isolation from other countries. This caused America not to join the 'League Of Nations', but also contributed to the growth of American natavism. Another factor that some historians have put forward is that hostility grew because of internal factors not external factors for example social and economic issues as well as religious and political fears. In social terms immigrants were seen as living in poor and overcrowded conditions with many Americans believing that they were contributing to increases in crime. From an economic point of view immigrants were seen as being willing to work for lower wages, in poor conditions and taking up American jobs. Some historians have argued that there were also religious and political fears that lead to hostility for example most Americans were white protestant and were afraid of the large numbers of catholic or Jewish immigrants. In addition many of the new immigrants were seen as coming from communists countries and so were seen as a threat to American society. The strikes and riots in the 1920's and the Sacco Vanzetti case were examples of the fear and hostility towards the new immigrants. In conclusion having looked at all the factors the most important factor contributing to the growing hostility of Americans towards immigrants is the changing nature of immigration. The change in the type of immigrant coming to America was the catalyst for many of the social and economic problems. The number of immigrants coming to America was a dramatic change and caused overcrowding and uptake of low skilled and low paid jobs. This made the Americans feel hostile and changed the face of American society for ever. ...read more.