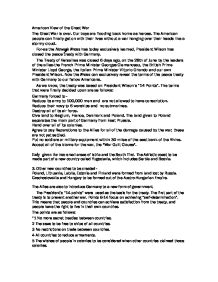 American View of the Great War.

American View of the Great War The Great War is over. Our boys are flooding back home as heroes. The American people can finally get on with their lives without a war hanging over their heads like a stormy cloud. For-as the Newark Press has today exclusively learned, President Wilson has closed the peace treaty with Germany. The Treaty of Versailles was closed 6 days ago, on the 28th of June by the leaders of the allies-the French Prime Minister Georges Clemenceau, the British Prime Minister Lloyd George, the Italian Prime Minister Vittorio Orlando and our own President Wilson. Now the Press can exclusively reveal the terms of the peace treaty with Germany to our fellow Americans. ...read more.

The Adriatic coast to be made part of a new country called Yugoslavia, which includes Serbia and Bosnia. 3. Other new countries to be created - Poland, Lithuania, Latvia, Estonia and Finland were formed from land lost by Russia. Czechoslovakia and Hungary to be formed out of the Austro-Hungarian Empire. The Allies are also to introduce Germany to a new form of government. The President's "14 points" were used as the basis for the treaty. The first part of the treaty is to prevent another war. Points 6-14 focus on achieving "self-determination". This means that people and countries can achieve satisfaction from the treaty, and people have the right to live in their own countries. ...read more.

As you can see, the two documents don't exactly match. We at the Press have reason to believe that this is because of the other leaders having rather more selfish views on the matters at hand. The Press has discovered through secret sources that Congress are not altogether happy about the President's points, and his opinions at Versailles. Our esteemed president is rapidly losing popularity in some states, again because of his unselfish and idealistic ways to try to avoid war, and his interest in the world around us. To offence meant to our Congressman or the American people, but we think our President had the right idea. The Press wants you to support your president, and realise that we have friends in our allies and their countries and peoples. We should listen to our president and avoid keeping ourselves to ourselves, but do as much as we can to aid Europe. ...read more.