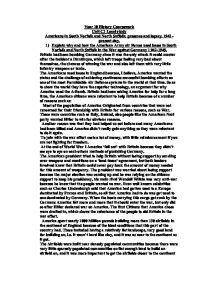 Year 10 History Coursework Unit C1 Local study Americans in South Norfolk and North Suffolk: presence and legacy, 1942- present day. 1) Explain why and how the American Army air Forces used bases in South Norfolk and North Suffolk in the War against Germany 1942-1945. Britain had been bombing Germany since it was the only attack it could muster after the incident a Dunkirque, which left troops feeling very bad about themselves, the chances of winning the war and also left them with very little infantry weapons or tanks. The Americans used bases in England because, I believe, America wanted the status and the challenge of achieving continuous successful bombing efforts on one of the most Formidable Air Defence systems in the world at that time. So as to show the world they have the superior technology, an argument for why America used the A-Bomb. Britain had been asking America for help for a long time, the American citizens were reluctant to help Britain because of a number of reasons such as: Most of the population of America Originated from countries that were not renowned for their friendship with Britain for various reasons, such as War. These were countries such as Italy, Ireland, also people like the American Nazi party wanted Hitler to win for obvious reasons. Another reason was that they had helped us out before and many Americans had been killed and America didn't really gain anything so they were reluctant to do it again. To join with the war effort costs a lot of money, with little reimbursement if you are not fighting for freedom. ...read more.

Also during the war the Americans became a real 'hit' with the ladies, this would damage the British people's ego and make them feel inferior, and the British men didn't take kindly to this which left them resenting the Americans. Local businesses such as shops or pubs saw the Americans as a very big earner. Because the Americans had so mush money they could afford things that hardly any British people could; like bikes and good quality clothes. However this lead to bad relations also because people like taxi drivers, shopkeepers and landlords charged more for the Americans because some Americans had little knowledge of the value of English currency, which was to be fair a very complicated one. The women seemed dazzled by the Americans charm, money, style, upfront attitude and looks. The women were 'taken' with the G.Is and lots of relationships were formed because the British women were captivated and longed for some excitement, whereas some of the Americans had just wanted some female 'company' because they had been away from women for a longer period than most of them had experienced before. Many of these relationships ended in marriage, which was not always a good thing because when the G.Is left The women were shipped over to America and never met by their husbands because they were either already married or didn't like the commitment. Not all of the marriages ended like this and most lived together happily, normally in America, but then the British women got the culture shock, they had the impression that everyone was laid back about everything, but in reality the Americans worked very hard all the time and so some of the women left because of this to. ...read more.

The places are renowned for being an agricultural and rural, and no amount of visiting is going to change the amount of farming in these places. One thing that may have affected people in these areas up until around 1970, approximately, because of how widespread travel is, is the local peoples attitude to Black people. In this area of Britain, many people had never seen black people before, except for on the television. When Americans brought over black G.I's the locals were surprised, but still as hospitable to them as any other G.I. This may have opened people's eyes to different races, but this is still a very minor change that I have speculated. In conclusion to these facts I can say that as a country we owe a lot to the G.I's of world war 2, not just for helping us, but for bringing over their lifestyle and for sharing it with the British, making britain a less monotonous place than it otherwise could have been. As a Community, though, we don't have much to show for the G.I's stay in our local area, apart from a few memorials and a Library in Norwich. The place has had more influence from surrounding counties or towns than it did from the G.I's because these places did like the way the Americans behaved and liked their taste. It took a while for Norfolk and Suffolk to become accustomed to these changes, which is why as most of the country moved on in terms of fashion and lifestyle, this area, was still catching up. ...read more.