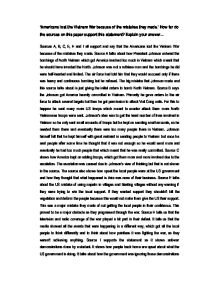 'Americans lost the Vietnam War because of the mistakes they made.' How far do the sources on this paper support this statement?

'Americans lost the Vietnam War because of the mistakes they made.' How far do the sources on this paper support this statement? Explain your answer... Sources A, B, C, E, H and I all support and say that the Americans lost the Vietnam War because of the mistakes they made. Source A talks about how President Johnson ordered the bombings of North Vietnam which got America involved too much in Vietnam which meant that he should have invaded the North. Johnson was not a ruthless man and the bombings he did were half-hearted and limited. The air force had told him that they would succeed only if there was heavy and continuous bombing but he refused. The big mistake that Johnson made and this source talks about is just giving the initial orders to bomb North Vietnam. Source B says the Johnson got America heavily committed in Vietnam. Primarily he gave orders to the air force to attack several targets but then he got permission to attack Viet Cong units. ...read more.

Source E talks about the US mistake of using napalm in villages and blasting villages without any warning if they were trying to win the local support. If they wanted support they shouldn't kill the vegetation and deform the people because this would not make them give the US their support. This was a major mistake they made of not getting the local people in their confidence. This proved to be a major obstacle as they progressed through the war. Source H tells us that the television and radio coverage of the war played a bit part in their defeat. It tells us that the media showed all the events that were happening in a different way, which got all the local people to think differently and to think about how pointless it was fighting the war, as they weren't achieving anything. Source I supports the statement as it shows anti-war demonstrations done by a student. It shows how people back home are upset about what the US government is doing. ...read more.

There are other things on the that show that it was America's faults that caused their lose. At the bottom is says 'price of admission: your son plus taxes' which means to say the USA put too many of their people in the war and wasted a lot of money that they get from peoples taxes. Source G shows both sides to the statement. It talks about how the mistake of the US of have puppet allies in the areas caused them trouble and eventually got them to lose control of a big area. The other side that it shows is that it was not only the American fault for this attack. The Viet Cong thought out their whole plan really well, which caught the US troops. Source J talks about the mistakes but doesn't say that there were other things that might have caused their lose. This source talks about how the USA government got committed in Vietnam by send half a million troops over and all these troops used inhuman weapons. It also talks about that there were would never me a peaceful end to this war, which would be without any weapons. ...read more.