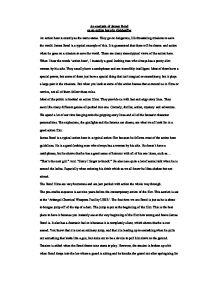 An analysis of James Bond as an action hero in GoldenEye An action hero is exactly as the name states. They go on dangerous, life threatening missions to save the world. James Bond is a typical example of this. It is guaranteed that there will be drama and action when he goes on a mission to save the world. There are many stereotypical views of the action hero. When I hear the words 'action hero', I instantly a good looking man who always has a pretty slim woman by his side. They usually have a catchphrase and are incredibly intelligent. Most of them have a special power, but some of them just have a special thing that isn't magical or exaordinary, but it plays a large part in the missions. But when you look at some of the action heroes that surround us in films or comics, not all of them follow these rules. Most of the public is hooked on action films. They provide us with fast and edgy story lines. They seem like many different genres all packed into one. Comedy, thriller, action, mystery and adventure. We spend a lot of our time hanging onto the gripping story lines and all of the fantastic character personalities. The explosions, the gunfights and the famous car chases, are what we all look for in a good action film. ...read more.

When you put her whole outfit together with her car, she looks dangerous, but very very sexy. Just the type of woman Bond would go for. Xenia is very womanly, but she is also very man like. She smokes cigars, she swears, she beats up men and kills them. But what makes her masculine side stand out more is when we find out that she is an ex-fighter pilot. She is definitely not your everyday average innocent businesswoman like Caroline. When we see Xenia at the casino, she is wearing a very revealing outfit. It is at this point she reveals her accent and her unusual sexy name. Xenia Onnatopp. When she orders her drink she likes it straight up with a twist. This is also how she likes her sex. The twist being the pain she causes the other person. Her name is not just there to go along with her being a sexual preditor, but because she is foreign. Xenia actually means alien. In the scene where we see her having sex with the captain, she acts out her name. And she causes him not just pain, but death but suffocating him during sex. When Bond is aboard the boat the next day, the film shows Bond being a typical action hero. We are shown this when he sees the mans reflection on the handle and reacts quickly by turning round and beating the man up. ...read more.

All the time you can hear the violins playing romantic music in the background. When Xenia gets killed it is quite dramatic because there is a big fight before hand. You expect Bond to shoot her, but he shoots the pilot of the helicopter and attaches her to it and she is hanged. The computer-generated scenes of the antenna coming out of the water are very spectacular and very realistic. You expect a smallish sort of thing, but instead out comes a massive thing, which looks magnificent. Another magnificent computer-generated scene was the explosion of the antenna and centre. Again it was like a child's cartoon. When Alec falls from the antenna, he miraculously survives, with little blood. Although he is then smashed to a pulp by the burning antenna, but you don't actually see the body or any blood. But again humour was added when Boris shouts, "I am invincible" when he is one of the few survivors, but he is then frozen by the gas. I really enjoyed this film. It was a parody of action films, but also a parody of other Bond films. This is shown when he falls in love with Natalya and is out for revenge against Alec, instead of staying focused on the mission and not getting his emotions involved. I would recommend GoldenEye to almost anyone. ...read more.