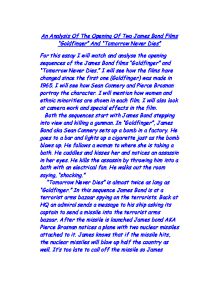 An Analysis Of The Opening Of Two James Bond Films "Goldfinger" And "Tomorrow Never Dies" For this essay I will watch and analyse the opening sequences of the James Bond films "Goldfinger" and "Tomorrow Never Dies." I will see how the films have changed since the first one (Goldfinger) was made in 1965. I will see how Sean Connery and Pierce Brosnan portray the character. I will mention how women and ethnic minorities are shown in each film. I will also look at camera work and special effects in the film. Both the sequences start with James Bond stepping into view and killing a gunman. In "Goldfinger", James Bond aka Sean Connery sets up a bomb in a factory. He goes to a bar and lights up a cigarette just as the bomb blows up. He follows a woman to where she is taking a bath. He cuddles and kisses her and notices an assassin in her eyes. ...read more.

James pushes the ejector seat button for the man in the seat behind. The man flies through to the back seat of the other plane and it explodes. James Bond flies off saying, "Back Seat Driver." Seeing as James Bond is played by two different actors in each film, there has to be differences in the character. Sean Connery plays James Bond as a sleek womanising spy, but Pierce Brosnan plays the character as more of a spy than a womaniser. But even with both films having different actors starring as James Bond there are things of the character that are shown by both character, for example the wittiness of the character is evident by actors Sean Connery says "shocking," because of two things one being the man he electrocuted in the bath and the other because a woman went against him and James Bond doesn't have that happen often. Pierce Brosnan comes up with "backseat driver" because of the guy trying to kill him while he was flying the plane. In each film women are shown differently. ...read more.

Technology has changed a lot in forty years and the budget on films when "Goldfinger" was made was a lot less than when "Tomorrow Never Dies" was made. The as with special effects can be said with the camera work in "Goldfiger it is one camera following James Bond around. In "Tomorrow Never Dies" there are a number of different cameras, with James bond, at HQ and following the boat and its missile all using different angles. With music there is a slight difference both sequences open with the same James Bond theme tune. In "Goldfinger" the music is quiet because James Bond is sneaking around a lot. "Tomorrow Never Dies" has loud music while James Bond is attacking the terrorist arms bazaar. In conclusion the differences are mainly because of times the films were made was a lot more in "Tomorrow Never Dies than in "Goldfinger." The effects have definitely changed due to improvements in technology. The roles of women and ethnic minorities have changed as in society (they are shown in more powerful roles). James himself has stayed practically the same suave sophisticated and a woman lover. ...read more.