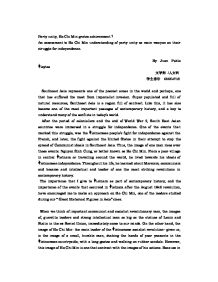 An assessment to Ho Chi Min understanding of party unity as main weapon on their struggle for independence.

Party unity, Ho Chi Min grates achievement ? An assessment to Ho Chi Min understanding of party unity as main weapon on their struggle for independence. By Juan Pablo Vieytes ??? /??? ???? 00064713 Southeast Asia represents one of the poorest areas in the world and perhaps, one that has suffered the most from imperialist invasion. Super populated and full of natural resources, Southeast Asia is a region full of contrast. Like this, it has also become one of the most important passages of contemporary history, and a key to understand many of the conflicts in today's world. After the period of colonialism and the end of World War 2, South East Asian countries were immersed in a struggle for independence. One of the events that marked this struggle, was the Vietnamese people's fight for independence against the French, and later, the fight against the United States in their attempt to stop the spread of Communist ideals in Southeast Asia. Thus, the image of one man rises over these events. Nguyen Sinh Cung, or better known as Ho Chi Min. From a poor village in central Vietnam or travelling around the world, he lived towards his ideals of Vietnamese independence. ...read more.

Many times he would repeat " You can kill 10 of my men for every one I kill of yours, yet even at those odds, you will lose and I will win"4 However, conviction can not be only guided by words but also by actions. And is for that reason that Ho Chi Min saw party unity as a key part of their project. Although Ho Chi Min was always pre-eminent as the head of the party during his lifetime, he always understood that to integrate the rest of the party on the decision making process, and to use moral example rather than try to impose his own thinking, was the more important point when it came to choose his leadership style. Like this, the respect for party criteria became more important than any specific ideology, not only Ho Chi Min`s ideology, but also, from any other of the main leaders within the party. They even disagree with the powerful Chinese communist party on the issue of creating an omnipotent image of Mao. Although the Vietnamese are not free of guilt when it comes to idealise their own leader, they still kept the emphasis on collective leadership.5 Critics to the Chinese communist even existed after Ho`s death. ...read more.

This unity of thinking contributed to avoid the creation of different ideological groups inside the party, to commit completely towards their fundamental revolutionary goals of independence, and create a more flexible base among the Party. Ho`s awareness of the importance of this feature, is another reason that make him an extraordinary leader. Many can be the critics towards Ho Chi Min. That he was manipulative in creating an immaculate image of himself, in order to create moral example, but he had at least two wives or concubines. Or that he would offer cheap cigarettes to poor peasants, as he kept expensive imported cigarettes in his other hand.9 Or that he would violate human rights, but always put himself apart from those "horrible crimes". However, to him it seems all this was a part of his master plan, his hatred towards the French, his conviction and his dream of seeing Vietnam united. His benevolent image, the simple and comprehensive words towards his "little brothers", were all part of a plan which he knew it was one of the most important ways of achieving his goal. Like this, Ho Chi Min desire for a independent and united Vietnam was successfully attained, and the unity that he understood was necessary and the party leaders and the Vietnamese people allowed, created of him one of the biggest leaders in history. ...read more.