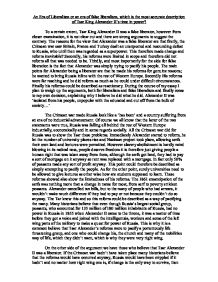 An Era of Liberalism or an era of false liberalism, which is the most accurate description of Tsar King Alexander II's time in power?

An Era of Liberalism or an era of false liberalism, which is the most accurate description of Tsar King Alexander II's time in power? To a certain extent, Tsar King Alexander II was a false liberator, however from closer examination, it is not clear cut and there are strong arguments to suggest the contrary. The reasons for the view that Alexander was a false liberator are that firstly, the Crimean war saw Britain, France and Turkey dealt an unexpected and resounding defeat to Russia, who until then was regarded as a superpower. This therefore made change and reform inevitable? Secondly, his reforms were limited in scope and therefore did not reform all that was needed to be. Thirdly, and most importantly for the side for false liberation is the fact that Alexander was simply trying to pacify his people. The main points for Alexander being a liberator are that he made his reforms for genuine reasons; he wanted to bring Russia inline with the rest of Western Europe. Secondly His reforms were far reaching and he did reform as much as he could under difficult circumstances. ...read more.

If the Crimean war hadn't have taken place many historians believe that the reforms would have occurred anyway, Russia would have been crippled if it hadn't and no matter how right wing one is, if change is the only way to survive, then change will take place. Alexander knew that an educated people are a more advanced people, and this is why he relaxed censorship, and allowed papers to publish what they wanted. This allowed people to know the truth and decide what they want, not what the government wanted to let people know. He was also a where that reform was needed in industry, and during his reign as Tsar, Russia's economy grew by four percent , due to reforms in industry. Alexander's reforms were far reaching, he didn't reform just the lower class, and he passes the Universal military act which meant the all men (including the nobility and church) had to perform military service. This was not popular with the upper classes as they did not want their sons to be in danger. This is an example of the Tsar not passing reforms to 'pacify the people' and it shows his reforms reached even the upper classes of Russia. ...read more.

In conclusion for the answer of whether Tsar Alexander's time in power can be classed as an era of liberalism or false liberalism, it can be argued for, against or some people say neither one or the other, it is not an open shut case, however the main argument is for an era, neither of liberalism nor false liberalism. Although Tsar Alexander made many reforms it is clear that he made the pre 1866 reforms were for the good of Russia and the upper class, and post 1866 the reforms were for the lower classes but were still beneficial to Russia. Alexander tried desperately to catch up with Western European countries economically, socially and politically, some were liberal some were falsely liberalizing, although it could be argued although the emancipation of the serfs looks like false liberalism it was to keep Russia right wing and under control so it could also be seen as a cleaver ploy by Alexander to keep the masses happy, this was a mistake and he paid with an attempt on his life, there after he did not try false liberalism again. ...read more.