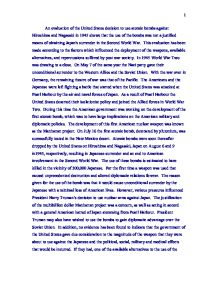 An evaluation of the United States decision to use atomic bombs against Hiroshima and Nagasaki in 1945 shows that the use of the bombs was not a justified means of obtaining Japan's surrender in the Second World War. This evaluation has been made according to the factors which influenced the deployment of the weapons, available alternatives, and repercussions suffered by post war society. In 1945 World War Two was drawing to a close. On May 7 of the same year the Nazi party gave their unconditional surrender to the Western Allies and the Soviet Union. With the war over in Germany, the remaining theatre of war was that of the Pacific. The Americans and the Japanese were left fighting a battle that started when the United States was attacked at Pearl Harbour by the air and naval forces of Japan. As a result of Pearl Harbour the United States deserted their isolationist policy and joined the Allied forces in World War Two. During this time the American government was working on the development of the first atomic bomb, which was to have large implications on the American military and diplomatic policies. The development of this first American nuclear weapon was known as the Manhattan project. On July 16 the first atomic bomb, detonated by plutonium, was successfully tested in the New Mexico desert. Atomic bombs were soon thereafter dropped by the United States on Hiroshima and Nagasaki, Japan on August 6 and 9 in1945, respectively, resulting in Japanese surrender and an end to American involvement in the Second World War. The use of these bombs is estimated to have killed in the vicinity of 300,000 Japanese. For the first time a weapon was used that caused unprecedented destruction and altered diplomatic relations forever. The reason given for the use of the bomb was that it would cause unconditional surrender by the Japanese with a minimal loss of American lives. However, various pressures influenced President Harry Truman's decision to use nuclear arms against Japan. ...read more.

The plan was, "to wait for an American invasion of their homeland and then throw back the enemy with all the forces Japan still had, from kamikaze suicide pilots and human torpedoes to old men and women with bamboo spears." (231) Japan was not prepared to surrender and become subject to American decisions. Japanese troops had already demonstrated that they would continue to fight and inflict heavy loss no matter how meek the outlook. An invasion of the homeland would have prolonged the war into 1946. However, given the difference in estimated casualties of the two manoeuvres an invasion should have been given due deliberation as an alternative by President Truman, instead of having been brushed aside in a decision to use the atomic bombs in accordance with the previously examined motives. Another alternative that should have been considered was a resolution of fighting through diplomatic negotiations. When Japan finally surrendered after the second atomic bomb was dropped, on Nagasaki, they made one condition: they surrendered "with the understanding that the said declaration does not compromise any demand which prejudices the prerogatives of his majesty as supreme ruler." (Loebs 10). The fact that they were willing to surrender at that point as long as Emperor Hirohito was permitted to retain his position raises the question of whether they would have accepted earlier surrender terms if a modification had been made to the terms, allowing for the Emperor to remain as the supreme ruler. Admiral Leahy, Truman's chief military advisor spoke on the Japanese preparedness to surrender: "The Japanese were already defeated and ready to surrender because of the effective sea blockade and the successful bombing with conventional weapons." (as quoted in Harsch 3) Given that the United States had made clear to Japan that their demand was for unconditional surrender, as history professor Alonzo Hambay has noted, "...the United States could have made it clear...that unconditional surrender would not mean the removal of the emperor." ...read more.

Either of these diplomatic acts could have caused their surrender. Given that the existing alternatives were beneficial in regards to the aims of the United States one of them should have been employed to avoid the unleashing of the atomic bomb for the first time. The atomic bombs created unprecedented destruction and had long lasting repercussions ranging from the implication of severe medical conditions on those exposed to the blasts in Hiroshima and Nagasaki to the incitation of an arms race that became a determining factor of the Cold War between the United States and the Soviet Union. The atomic bombs, although they only took virtually seconds to force Japanese surrender caused mass casualties and thrust the world into a new era of warfare-the nuclear age. Given that President Truman had motives other than minimizing American casualties in dropping the bombs and therefore did not consider the available alternatives despite the advantages they possessed. It is evident that little consideration was given to the repercussions that the bombs would create as they were employed so quickly after their development. The effects were lasting, severe, and as many historians have concluded since 1945, unnecessary. Many American government officials such as Secretary of War Henry Stimson and renowned historians such as Herbert Feis and David McCullough have concluded that the use of the atomic bombs was not mandatory in obtaining Japanese surrender. In consideration of all the evidence it is found that President Truman and the United States were not justified in giving the command to drop atomic bombs on Japan to end the fighting in the Pacific as there were more advantageous means available to reach their desired end of the termination of the war that were not considered because of clandestine motives that existed for the use of the atomic bombs. As General Dwight Eisenhower of the United States stated in regards to the use of the atomic bomb on Japan in 1945, "'It wasn't necessary to hit them with that awful thing.'" (Alperovitz 4) Word Count: 3,903 1 ...read more.