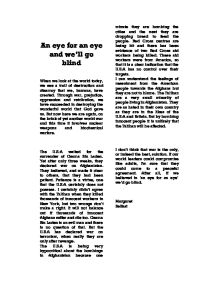 An eye for an eye and we'll go blind When we look at the world today, we see a trail of destruction and disarray that we, humans, have created. Through war, prejudice, oppression and retribution, we have succeeded in destroying the wonderful world that God gave us. But now here we are again, on the brink of yet another world war and this time it involves nuclear weapons and biochemical warfare. ...read more.

It will not balance out if thousands of innocent Afghans suffer and die too. Osama Bin Laden is an evil man and there is no question of that. But the U.S.A has declared war on terrorism, when really they are only after revenge. The U.S.A is being very hypocritical about the bombings in Afghanistan because one minute they are bombing the cities and the next they are dropping bread to feed the people. ...read more.

The Taliban are a very small minority of people living in Afghanistan. They are as hated in their own country as they are in the likes of the U.S.A and Britain. But by bombing innocent people it is unlikely that the Taliban will be affected. I don't think that war is the only, or indeed the best, solution. If our world leaders could compromise like adults, I'm sure that they could come to a peaceful agreement. After all, if we believed in 'an eye for an eye' we'd go blind. Margaret Belfast ...read more.