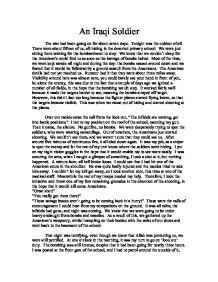 An Iraqi Soldier The war had been going on for about seven days. Tonight was the coldest of all. There were about fifteen of us, all-hiding in the deserted primary school. We were just sitting there waiting for the bombardment to stop. We knew that we couldn't sleep for the American's could find us as soon as the barrage of bombs halted. Most of the time, we were kept awake all night and during the day: the bombs ceased around dawn and we feared that it would be followed by a ground assault from the Americans. The American devils had not yet reached us. Rumour had it that they were about three miles away. Visibility around here was almost zero, you could barely see your hand in front of you, let alone the enemy, this was due to the fact that a couple of days ago we ignited a number of oil fields, in the hope that the bombing would stop. It worked fairly well because it made the targets harder to see, meaning the bombs strayed off target. ...read more.

It was all calm, the infidels had gone, and night was coming. We knew that we were going to be under heavy onslaught from bombs and missiles. As a result of this, we gathered up the American's weaponry, whilst trampling on their bodies with the soles of our shoes and went back to the basement of the school. That night was terrifying, even though we knew that Allah was protecting us, we were still petrified. At one o'clock in the morning, it was my turn to go on 'look out' duty. The bombing was still intense, despite that it had been going for nearly three hours. I was posted at the front gate of the school, and I had to patrol around the outside of it, alone for two hours and then the next soldier would come and relieve me. After an hour, I saw somebody walking towards me, I could see them holding their gun. I drew mine quickly and shouted, "Halt, who goes there, friend or foe?" I heard a feint cry of, "Don't shoot, it's me, Borac." ...read more.

We carried on fighting, but as we fought, I could see that the soldiers began doubting themselves even more. You could see that they were tiring and just wanted to stop. Nevertheless, I kept on giving them shouts of encouragement. Looking at the Americans, it seemed almost as if they were enjoying demoralising my troops. Soon, it would start getting dark, then the fighting would probably stop and the bombs would start dropping, I could tell that my men could not last another night without sleep. So, after another hour of fighting we gave ourselves up to the Americans. They took all of our weapons and searched the school. We all told the soldiers that we had no idea where Saddam was hiding. Taking into account that we had surrendered and they could see that we needed food the Americans fed us and gave us bottles of water to drink. After everything that we had gone through for Saddam, it turned out that he had been lying to us all along. He told us that the Americans were like the Devil, they would kill us as soon as they had the chance. However, we now know that they are quite the opposite. By Andrew Read ...read more.