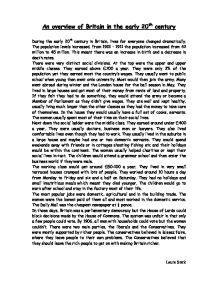 An overview of Britain in the early 20th century During the early 20th century in Britain, lives for everyone changed dramatically. The population levels increased. From 1901 - 1911 the population increased from 42 million to 45 million. This meant there was an increase in birth and a decrease in death rates. There were very distinct social divisions. At the top were the upper and upper middle classes. They earned above �700 a year. They were only 3% of the population yet they earned most the country's wages. They usually went to public school when young then went onto university. Most would then join the army. Many went abroad during winter and the London house for the ball season in May. They lived in large houses and got most of their money from rents of land and property. If they felt they had to do something, they would attend the army or become a Member of Parliament as they didn't give wages. ...read more.

The system was unfair in that only a few people could vote. By 1906, all men with households could vote but the women couldn't. There were two main parties, the liberals and the Conservatives. They were mostly supported by richer people. The conservatives believed in laissez faire, where they leave people to their own problems. The Conservatives believed that they should leave the rich people to get on with making Britain richer. The Liberals believed in freedom of the individual and that you had to work hard if you wanted to be wealthy. This meant that the rich then looked down on the poor as they believed it was their own fault that they were poor and they deserved it. Both classes showed interest in the rich and there was no party representing the poor until the labour party was introduced in 1900. Until the late 19th century, the only successful unions were of those run by highly skilled and rich craftsmen who could afford to subscribe to unions for a long time. ...read more.

It was developed for military uses. More people began to use the newly invented telephone within cities. With the wireless, more people began to use it and so did navies, business men etc. this speeded up business and news making life easier for many people. The vacuum was both a good and a bad thing. It meant less work for maids as they didn't have to beat the carpets all day. Irons and lighting also meant less work for maids. But this also meant that as there was less work to do, which meant fewer domestic servants were needed so many lost their jobs. Entertainment became more popular for all classes. The gramophone was mainly used by only the upper classes but the cinema was available for all classes. Although there were different cinemas for different people, everyone could go and it lifted the souls of many poor people as it was something they could get involved in too. So in the early 20th century, dramatic changes happened. By the end of the early 20th century, the world around people had become a whole different place in Britain. ?? ?? ?? ?? Laura Stark ...read more.