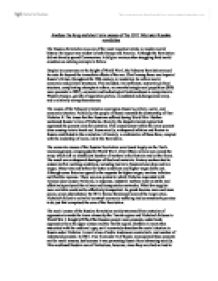 Analyse the causes of the Russian civil war

Analyse the long and short term causes of the 1917 February Russian revolution The Russian Revolution was one of the most important events in modern world history. Its impact was evident in both Europe and America. Although the Revolution did not directly spread Communism, it did give various other struggling third world countries an enticing example to follow. Despite its occurrence at the height of World War I, the February Revolution traced its roots far beyond the immediate effects of the war. Chief among these was Imperial Russia's failure, throughout the 19th century, to modernize its archaic social, economic and political structures. This included; An inefficient, autocratic political structure, complicating attempts at reform, an overwhelmingly rural population (83% were peasants in 1897), economic and technological backwardness in comparison to Western Europe, growth of opposition parties, an outdated and disorganized army, and a relatively corrupt bureaucracy. The causes of the February revolution encompass Russia's political, social, and economic situation. ...read more.

The social causes of the Russian Revolution mainly stemmed from centuries of oppression towards the lower classes by the Tsarist regime and Nicholas's failures in World War I. Roughly 85% of the Russian people were peasants, under harsh oppression from the upper classes and the Tsarist regime. Serfdom is most often associated with the medieval ages, yet it accurately describes the social situation in Russia under Nicholas: A small class of noble landowners controlled a vast number of indentured peasants. In 1861, Tsar Alexander II of Russia emancipated these peasants not for moral reasons, but because it was preventing Russia from advancing socially. This newfound freedom was of limited use, however, since they now had no land to work. As a result, the government drafted new terms that gave the peasants set amounts of land to cultivate. However, the amount of land they were given was insufficient, thus mass riots broke out. ...read more.

Mutinies began to occur, and in 1916 reports of fraternizing with the enemy started to circulate. Soldiers went hungry and lacked shoes, munitions, and even weapons. Rampant discontent lowered morale, only to be further undermined by a series of military defeats. Nicholas was blamed, and what little support he had left began to crumble. As this discontent and utter hate of Nicholas grew, the State Duma (lower class of Russian parliament comprised of landowners, townspeople, industrial workers, and peasants) issued a warning to Nicholas in November 1916 stating that disaster would overtake the country unless a constitutional form of government was put in place. In typical fashion, Nicholas ignored them. As a result, Russia's Tsarist regime collapsed a few months later during the February Revolution of 1917. A year later, the Tsar and his family were executed. Ultimately, Nicholas's inept handling of his country and the War destroyed the Tsarist regime and cost him both his rule and his life. ...read more.