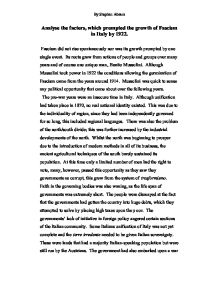 Analyse the factors, which prompted the growth of Fascism in Italy by 1922.

Analyse the factors, which prompted the growth of Fascism in Italy by 1922. Fascism did not rise spontaneously nor was its growth prompted by one single event. Its roots grew from actions of people and groups over many years and of course one unique man, Benito Mussolini. Although Mussolini took power in 1922 the conditions allowing the germination of Fascism came from the years around 1914. Mussolini was quick to sense any political opportunity that came about over the following years. The pre-war years were an insecure time in Italy. Although unification had taken place in 1870, no real national identity existed. This was due to the individuality of region, since they had been independently governed for so long, this included regional languages. There was also the problem of the north/south divide; this was further increased by the industrial developments of the north. Whilst the north was beginning to prosper due to the introduction of modern methods in all of its business, the ancient agricultural techniques of the south barely sustained its population. At this time only a limited number of men had the right to vote, many, however, passed this opportunity as they saw they governments as corrupt, this grew from the system of trasformismo. Faith in the governing bodies was also waning, as the life span of governments was extremely short. ...read more.

The two major consequences for Italy due to the end of the war were national resentment and social tensions. The national tensions grew from Italy not being given all the territories it had been promised at the Treaty of London. This was largely due to President Woodrow Wilson and his concept of a New World Order. Many war veterans felt particularly hurt by this feeling as is there sacrifice had gone in vein. They were angry that the government had not secured what it had promised for its people. These war veterans would be the early supporters of Fascism in later years. The eccentric poet Gabriele D'Annunzio took the resentment to the extreme, when he took over the Yugoslav port of Fiume. It took the Italian government over a year to react, showing their indecisive nature. The social resentment lay in the declining Italian industry. During the war the government had spent a huge amount of money on equipment for the military and the Italian industry had prospered due to receiving these large orders. After there was no longer the need for the equipment, therefore no orders and so the industries began to decline. This did not only affect the business owners but the workers too. Inflation at this time meant that small workers wages could buy even less. The workers felt outraged that they had been made to work long hours in poor conditions for the government during the war and now this was their reward. ...read more.

The officer class to tended support Fascism, but could not openly show their allegiance as to keep discipline. The Police openly should their support by standing back whilst the Fascist used extreme violence against socialists. Many of the aristocratic class began to support Fascism after Mussolini stopped hi verbal attacks on the monarchy. In fact the Queen's Mother, Margherita, and the King's cousin, the Duke of Aosta, were admirers of Fascism. When the threat of the "March on Rome" came about the King was indecisive, he initially gave the order for martial law, and then he withdrew it. He feared a civil war, he had no compassion for the Liberals, he felt that maybe Mussolini could deal with the socialist threat and he feared a coup from his cousin, so the order was never reissued. The army could not act, as they did not receive the order. And so, Mussolini was invited to form a government in October 1922, the following day his black shirts marched through Rome, the threat had worked. To conclude I have shown that the rise of Fascism was due to a concatenation of events. All the necessary elements were there for the rise of a radical movement. Many countries in Europe had far right activists in them, but Italy was the first to embrace these views. As it had the society, culture and political system in place which left the country open to the birth, growth and rise of extremism. By Stephen Abram ...read more.