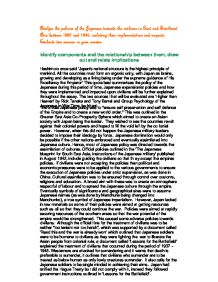 Analyse the policies of the Japanese towards the civilians in East and Southeast Asia between 1937 and 1945, including their implementation and impacts. Evaluate two sources in your answer.

Analyse the policies of the Japanese towards the civilians in East and Southeast Asia between 1937 and 1945, including their implementation and impacts. Evaluate two sources in your answer. Identify components and the relationship between them; draw out and relate implications Hashimoto once said 'Japan's national structure is the highest principle of mankind. All the countries must form an organic unity, with Japan as brains, growing and developing as a living being under the supreme guidance of His Excellency the Emperor' This quote best summarises the policy of the Japanese during this period of time. Japanese expansionist policies and how they were implemented and impacted upon civilians will be further explained throughout the essay. The two sources that will be evaluated are 'Higher than Heaven' by Rick Tanaka and Tony Barrel and Group Psychology of the Japanese in War Time, by Iritani. The official Japanese policy was to "ensure self preservation and self defence of the Empire and to create a new world order." This was outlined in the Greater East Asia Co-Prosperity Sphere which aimed to create an Asian society with Japan being the leader. ...read more.

Here buildings were burnt, women were raped and innocent citizens were murdered in various gruesome ways including ripping the stomachs, digging out the heart, boiling people and beheading victims. Iritani believes that this occurred due to the incredibly harsh fighting conditions in China which elevated the abnormal psychological state of the soldiers. Other historians believe that it was done in order to gain control and create a puppet regime in Nanking where Japanese assimilation could begin. In Nanking alone the impact of this policy caused the deaths of approximately 300,000 people in just six weeks. Women were captured and sent to 'comfort stations' to act as sex slaves although geisha houses were banned in Japan. As the war in China became longer and supply lines became inefficient Japanese soldiers began to confiscate crops and other agricultural goods, which led to food shortages and ultimately a failing of the economy. Manchunko, formerly Manchuria, became the centre of Japanese military and economic power, however the ultimate failure of Japanese economic policies caused the downfall of the Manchurian economy by 1945. The implementation of policies in Korea was the epitome of the attempt at Japanese civilisation. ...read more.

All countries occupied by Japan during the war had similar impacts such the mistreatment and subsequent death of civilians and adverse economic impacts. All nations also suffered a substantial psychological impacts from the years of harsh oppression, as described by Lai Yeo, who was a comfort woman to the Japanese. "The impact of Japanese policies did not end with their rule, the emotional scars will be something I will have to bear forever..." Source Evaluation Wantanabe Shoichi - claimed that the harsh treatment of Japanese did not occur, the Nanking massacres were fictional A Japanese nationalist Doesn't match other sources Saburo Inega - Campaigned against the censorship of Japanese textbooks that omitted out the atrocities Book written to show the Japanese policies the nake realities of the pacific war More reliable Iritani - 3rd generation Japanese American Useful as provides both perspectives and reasons for acts of atrocities Delves into the psyche Matches with other sources Lai Yeo - article on the internet First hand experience of Japanese brutality Matches with other sources although it seems to be a bit exaggerated Psychological state seems fragile, memories may be disrupted. Tony Barrel and Rick Tanaka - DJ's for TripleJ Although information matches with other sources they are not completely formed like other historians. Sometimes bit biased, "heroic Australians", "yellow Japanese" ...read more.