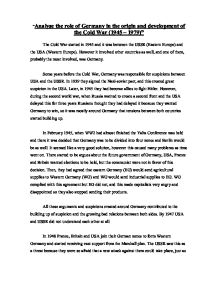 "Analyse the role of Germany in the origin and development of the Cold War (1945 - 1979)" The Cold War started in 1945 and it was between the USSR (Eastern Europe) and the USA (Western Europe). However it involved other countries as well, and one of them, probably the most involved, was Germany. Some years before the Cold War, Germany was responsible for suspicions between USA and the USSR. In 1939 they signed the Nazi-soviet pact, and this created great suspicion in the USA. Later, in 1945 they had become allies to fight Hitler. However, during the second world war, when Russia wanted to create a second front and the USA delayed this for three years Russians thought they had delayed it because they wanted Germany to win, so it was mostly around Germany that tensions between both countries started building up. ...read more.

By 1947 USA and USSR did not understand each other at all. In 1948 France, Britain and USA join their German zones to form Western Germany and started receiving vast support from the Marshall plan. The USSR saw this as a threat because they were so afraid that a new attack against them could take place, just as it had happen before with the Nazis. Later in the same year they introduced a common currency in western Germany and this made the Russians so angry that they left the allied control council and started the Berlin Blockade. This was a very important event. It was a very tense time in the Cold War, and the west had to do something about it, so in 1949 USA launched the Berlin airlift and Russia had to stop the blockade. ...read more.

and the Cuban missile crisis (1959) and arguments over Germany started to be of lesser importance. As a conclusion I would say that the role of Germany in the origin of the cold war was important because by signing the Nazi-soviet pact with Russia, the USA felt very suspicious and this contributed to the necessary suspicion for the Cold War to start. Moreover, it had a very important role in the development of the cold war until 1950. Germany was the main reason of the disagreements, the arguments, the tension and the anger of both, USA and USSR, therefore made the Cold War more important and gave it a good reason to go on; however with the start of the Korean War Germany's role declined and Germany was no longer the center of attention of the Cold War. So its role was very important only in the early years of the Cold war, then it was not so crucial. Carla Valdiz�n Number of words: 735 ...read more.