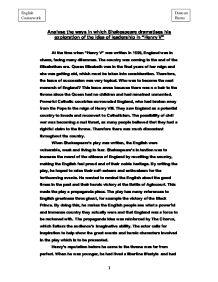 Analyse the ways in which Shakespeare dramatises his exploration of the idea of leadership in "Henry V" At the time when "Henry V" was written in 1599, England was in chaos, facing many dilemmas. The country was coming to the end of the Elizabethan era. Queen Elizabeth was in the final years of her reign and she was getting old, which must be taken into consideration. Therefore, the issue of succession was very topical. Who was to become the next monarch of England? This issue arose because there was no heir to the throne since the Queen had no children and had remained unmarried. Powerful Catholic countries surrounded England, who had broken away from the Pope in the reign of Henry VIII. They saw England as a potential country to invade and reconvert to Catholicism. The possibility of civil war was becoming a real threat, as many people believed that they had a rightful claim to the throne. Therefore there was much discontent throughout the country. When Shakespeare's play was written, the English were vulnerable, weak and living in fear. Shakespeare's intention was to increase the morel of the citizens of England by reuniting the country, making the English feel proud and of their noble heritage. By writing the play, he hoped to raise their self-esteem and enthusiasm for the forthcoming events. He wanted to remind the English about the good times in the past and their heroic victory at the Battle of Agincourt. This made the play a propaganda piece. The play has many references to English greatness throughout, for example the victory of the Black Prince. By doing this, he makes the English people see what a powerful and immense country they actually were and that England was a force to be reckoned with. The propaganda idea was reinforced by The Chorus, which flatters the audience's imaginative ability. The actor calls for inspiration to help show the great events and heroic characters involved in the play which is to be presented. ...read more.

As John Bates, Alex Court and Michael Williams were having a bitter conversation arguing about the King's responsibility for the situation, Henry dressed in disguise joins in with their dilemmas. The soldiers were worried about dying in the battle. They blamed the King for the desperate situation they were in. Henry said it wasn't the King's fault at all, and ends up quarrelling with Michael Williams. He said, "I beseech you take it for your own fault and not mine, for had you been as I took you for, I made no offence..." After this, Williams challenged him to a duel. An opposing view to this is that many people thought that the war was a good idea and were right behind Henry. To make the army of England work together to win the battle, Henry had to be a strong leader otherwise the army would fall apart. He did this by using his facility with language. Henry's rhetorical skill is a forceful weapon, the strength of which nearly equals that of his army's swords. With words, Henry can inspire and rouse his followers, intimidate his enemies, and persuade nearly anyone who hears him. With Henry's speeches, Shakespeare creates a rhetoric that is, like Henry himself, at once candidly frank and extremely sophisticated. Henry can be cold and menacing, as when he speaks to the Dauphin's messenger; he can be passionate and uplifting, as in his St. Crispin's Day speech; and he can be gruesomely terrifying, as in his diatribe against the Governor of Harfleur. In each case, Henry's words suggest that he is merely speaking his mind at the moment, but these speeches are brilliantly crafted and work powerfully on the minds of his listeners. Henry has a very special quality for a king: the ability to present himself honestly while still manipulating his audience. His battle speeches seem to show that he respects his men and trusts them to fight well. ...read more.

Really though, Henry knew exactly what he was doing. He wasn't really just a blunt soldier. In fact he was very confident and wasn't as stupid as he made out to be. This approach towards Katherine made her like him and although she knew that she had to marry him for political reasons, it made her want to. Henry did very well in uniting the two disparate countries. With Henry and Katherine being married suggested that England and France would probably get on and be in peace. In conclusion the character of Henry dominates the play throughout, overshadowing the other characters. He is a religious man, reinforced in Act I Scene I and has all the qualities of being a great leader. He is able to manage people exceptionally well shown by his unification of the army as a strong force. Shakespeare shows Henry's physical courage is never in doubt as he is a brave responsible soldier who does all that he can to protect his men. On the other hand, Shakespeare also shows Henry as a normal person who is mature, understanding sympathetic, with a sense of humour emphasised by the trick he plays on Williams and Fluellen. In matters of state Henry is firm and decisive as demonstrated by his reply to the Dauphin's 'tennis balls' insult, which is dignified but restrained. He is also fair and just. Shakespeare's exploration of leadership, through the character of Henry V, Shakespeare shows us that Henry has truly changed from the real tearaway he used to be. It seems that Shakespeare has presented us with the ideal monarch. Henry is loyal and leads by example. I think that the play was a great success. It gave the country a big boost and improved their self-esteem, which gave the citizens of England more confidence. However another opinion is that Henry is cold hearted, and a cynical ruthless manipulator, his piety a mask for his ambition and in seeking the approval of the church gave him someone to blame if all went wrong. 1 ...read more.