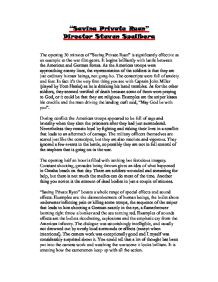 "Saving Private Ryan" Director Steven Speilberg The opening 30 minutes of "Saving Private Ryan" is significantly effective as an example to the war film genre. It begins brilliantly with battle between the American and German forces. As the American troops were approaching enemy lines, the representation of the soldiers is that they are just ordinary human beings, not gung-ho. The conscripts were full of anxiety and fear. In fact it's the very first thing you see with Captain John Miller (played by Tom Hanks) as he is drinking his hand trembles. As for the other soldiers, they seemed terrified of death because some of them were praying to God, or it could be that they are religious. ...read more.

They ignored a few events in the battle, so possibly they are not in full control of the mayhem that is going on in the war. The opening half an hour is filled with nothing but ferocious imagery. Constant shooting, grenades being thrown gives an idea of what happened in Omaha beach on that day. There are soldiers wounded and screaming for help, but there is not much the medics can do most of the time. Another thing you notice is the amount of dead bodies in just a couple of minutes. "Saving Private Ryan" boasts a whole range of special effects and sound effects. ...read more.

The camera work was exceptionally good and I myself was considerably surprised about it. You could tell that a lot of thought has been put into the camera work and watching the war scene it looks brilliant. It is amazing how the cameramen keep up with all the action. After analysing the first 30 minutes of "Saving Private Ryan". I believe that the effectiveness of this film as an example of the war film genre is simply sensational. This could be used as an archetype for future war films. All the elements added together such as representation of soldiers, the barbarous imagery, the clever camerawork and the mind blowing special effects and sound effects makes "Saving Private Ryan" perhaps one of the best war films of all time. ...read more.