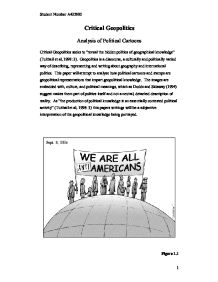 Critical Geopolitics Analysis of Political Cartoons Critical Geopolitics seeks to "reveal the hidden politics of geographical knowledge" (Tuithail et al, 1998: 3). Geopolitics is a discourse, a culturally and politically varied way of describing, representing and writing about geography and international politics. This paper will attempt to analyse how political cartoons and stamps are geopolitical representations that impart geopolitical knowledge. The images are embedded with, culture, and political meanings, which as Dodds and Sidaway (1994) suggest makes them part of politics itself and not a neutral, detached description of reality. As "the production of political knowledge is an essentially contested political activity" (Tuithail et al, 1998: 3) this papers writings will be a subjective interpretation of the geopolitical knowledge being portrayed. Figure 1.1 Title Sept. 11, three years after Artist Patrick Chappatte Attribution Patrick Chappatte, The International Herald Tribune Figure 1.1 portrays the changing attitude towards America from the world's population. Chappatte has placed a number of people in a variety of cultural dress, on top of a globe to symbolize the world's population. These figures are holding a banner, which has had a plaque added to change the sentence from, "We Are All Americans" to "We Are All Anti Americans". Chappatte is illustrating how the global consensus towards what Falk (2004: 241) sees as USA's "emergent global empire", has rapidly changed in the years after the September 11th attacks. ...read more.

west), feels China is emerging as a rival to the American supremacy which has been apparent in the uni-polar new world order, post cold war. Arcadio's cartoon visualises Dodds (2000: 12) proclamation that "China must be considered out of kilter with Fukuyama's prediction of the triumph of liberal democracy". Dodds (2000) is disagreeing with Fukuyama's thesis that the end of the cold war saw the end of history, in that there would never again be a threat to liberal democracy, and pointing out that the "political and economic strength of China must be considered a threat" (Dodds, 2000: 12) to liberal democracy, and therefore America. In continuation Figure 1.2 represents scepticism of the end of history thesis and proposes a geopolitical transition from a uni-polar world, to one once again with competition and tension. "Hegemonic orders of geopolitical discourse are fluid, contingent, and perpetually shifting in response to challenge" (Dalby et al, 1998: 20). Post Cold war there has been a geopolitical discourse of American dominance in the world after the collapse of communism. As stated figure 1.2 is highlighting a shift and showing China as an equal rival to America, and thus a weakening of American power. However Wallerstein (2003) believes the United States has been fading as a global power since the 1970s and that this decline has recently been accelerated. ...read more.

Figure 1.3 also imparts the knowledge that territory (as shown my the two globes) is an important geopolitical concept in this period. This is intriguing due to the fact that as Agnew (1998) points out the cold war period has been generally proclaimed as one of ideological geopolitics in which geography was very much a background issue. Figure 1.3 is showing territory to be a key issue of the times. This is an important notion for Sidaway (2005) who believes Mackinder's heartland theory on territory formed an important backdrop to the Cold War. Sidaway (2005) feels that the USA's nuclear deterrence policy of placing missiles in adjacent allied countries to the Soviet Union "was justified in part as compensation for the USSR's natural strategic advantage as the heartland power" (Sidaway, 2005: 391). This essay agrees with Sidaway, in believing Mackinder's territorial theory that who controlled the heartland of east central Europe controlled the world, played a role in cold war geopolitics, and explains why the US were so keen to contain the Soviets and not let them expand any further. With the importance of territory to the USA being shown through figure 1.3 as it was issued at the height of the cold war. In conclusion this essay suggests that Figure 1.3 is both a propaganda tool and show of strength by America in terms of technological status and is subtlety portraying geographical knowledge of the importance of territory in the cold war period. ...read more.